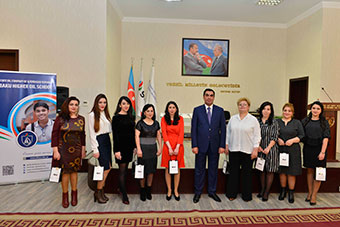 A special event on the occasion of International Women’s Day celebrated on March 8 was held at Baku Higher Oil School (BHOS). It gathered BHOS Rector Elmar Gasimov, lecturers, students and staff members of the Higher School.

The Rector Elmar Gasimov expressed his sincere congratulations to women and girls working and studying at BHOS as well as to all Azerbaijani women and wished them health, prosperity, happiness and every success in their activities. “In the past, women’s life was limited to family circle and housework, but nowadays Azerbaijani women actively participate alongside men in all spheres of the society life. They have been very successful in many spheres and have justifiably gained public recognition,” the rector said. He reminded that Azerbaijani women were the first women in the East who gained the rights to vote and participate in elections.

“Due to support and efforts by national leader Heydar Aliyev the position of women in the political, social, economic, scientific and cultural spheres has significantly strengthened. Their achievements are also acknowledged today by the President of the Azerbaijan Republic Ilham Aliyev; every year the most successful Azerbaijani women receive state awards and honorary titles on the eve of the International Women’s Day,” told Elmar Gasimov. He pointed out that multifaceted activities carried out by the First Vice-President of Azerbaijan, the President of the Heydar Aliyev Foundation, Goodwill Ambassador of UNESCO and ISESCO Mehriban Aliyeva provide a vivid evidence of the public recognition of the Azerbaijani women in development and prosperity of the country.

In conclusion, the Rector Elmar Gasimov once again congratulated women on the March 8 celebration and presented valuable gifts to all women and girls working or studying at BHOS. Then members of the Higher School Music Club arranged a concert and performed national songs and dances.