News
Indonesian Ambassador made a presentation at BHOS 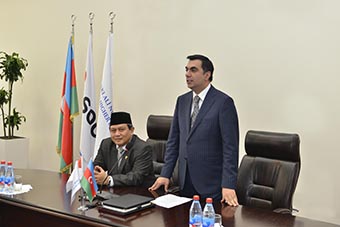 Ambassador of the Republic of Indonesia to Azerbaijan Dr. Husnan Bey Fananie visited Baku Higher Oil School (BHOS) and made presentation for BHOS students, staff members and academic teaching staff. Having welcomed the distinguished guest, the Higher School Rector Elmar Gasimov emphasized that despite globalization process around the world, Indonesia is a country that carefully preserves its originality and traditions.

The Indonesian Ambassador expressed his gratitude to BHOS Rector Elmar Gasimov for the opportunity to visit the Higher School once again. He said, “I am happy to work in such a wonderful country as Azerbaijan where nice and beautiful people live, and I am also happy to meet teachers and students of the Baku Higher Oil School again.” He briefed the meeting participants about geography and rich history of Indonesia as well as about cultural heritage of this multinational country.

The presentation covered topics such as development of the Republic of Indonesia as an independent state after it achieved nationhood in 1945, country economic dynamic growth, successes in industrial, social and financial spheres as well as in culture, education and development of international cooperation. These achievements, he said, are based on the optimal utilization of the natural resources including oil and gas reserves, and on the attraction of foreign direct investments. The Ambassador reported that Indonesia is part of the G20 Group, and occupies third place in the world in terms of the GDP growth after China and India.

Speaking about international relations of the Republic of Indonesia, Dr. Husnan Bey Fananie told about the country participation in the Association of Southeast Asian Nations (ASEAN), which Secretariat is set up in Jakarta, the Indonesian capital. He also emphasized that there are more than 7,000 higher educational institutions in the country, and the government pays special attention to the issues of education, providing support to young generation and youth’s involvement in the social and economic development of the country.

Then Dr. Husnan Bey Fananie answered questions and even played a few pieces of music on the keyboard. This performance at the end of the meeting became a pleasant surprise for the participants.