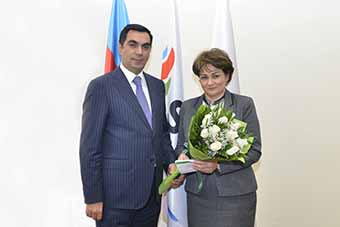 Management, teachers and students of Baku Higher Oil School (BHOS) bade farewell to Senior Lecturer of BHOS English Language and HD Centre, as she quits her job at BHOS and goes to live in a different country. Speaking at the meeting, the Higher School Rector Elmar Gasimov wished her good luck and every success. “A teacher is a key figure at university and plays an important role in students’ education, and professional and personal development. Sevda khanum is one of those teachers,” the rector said. He emphasized that after five years of work at BHOS she managed to win the respect of students and teachers.

Speaking at the meeting, students and colleagues said many good things about Sevda Imamova. Having noted that she was one of the most reputable and favorite teachers at the Higher School, they told that they would always speak about Sevda khanum as about kind person, highly qualified professional and a talented teacher. At the end of the event, BHOS Rector Elmar Gasimov expressed his cordial gratitude to Sevda Imamova for her excellent work at the Higher School. He presented Sevda khanum a bouquet of flowers and a plaquette as a token of appreciation.

Sevda Imamova graduated from Moscow State Pedagogical Institute of Foreign Languages named after Moris Thorez in 1982. From 1987-1992, she was a postgraduate student at the Azerbaijan University of languages and then began her teacher’s career at the University. From 2000-2003, Sevda khanum worked as a part-time teacher at Baku High Diplomatic College, and from 2003-2006, she worked as a part-time teacher at Baku Oxford School. She was a senior lecturer at Baku Higher Oil School from 2012-2017.