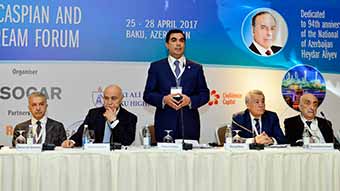 The 2nd SOCAR International Caspian and Central Asia Downstream Forum – Trading, Logistics, Refining, Petrochemicals commemorating the National Leader of Azerbaijan Heydar Aliyev’s 94th anniversary started in Baku. It is organized by the Baku Higher Oil School (BHOS) in collaboration with a British company Confidence Capital Ltd and powered by SOCAR. Prior to Forum opening ceremony, the guests and participants visited the Alley of Honors to lay a wreath at the tomb of national leader, founder and architect of modern Azerbaijani state Heydar Aliyev.

Opening the forum’s first session, the rector of the Baku Higher Oil School Elmar Gasimov noted the Forum is dedicated to the 94th birthday anniversary of the National Leader of Azerbaijan and initiator of the country’s oil strategy Heydar Aliyev. After welcoming the Forum participants and guests, BHOS rector emphasized the event’s great importance for the country, as it facilitates building business ties between professionals from across the globe, and effectively advocates the oil strategy implemented under the auspices of Azerbaijan’s president Ilham Aliyev.

In his address to the Forum participants and guests, Deputy Chairman of Milli Mejlis of the Azerbaijan Republic, Chairman of the Standing Commission on Natural Resources, Energy and Environmental Issues Valeh Alasgarov marked the invaluable contribution of the National Leader Heydar Aliyev to establishment of the independent Azerbaijan and development of the country’s fuel and energy sector, and wished success to the Forum. The Minister of Energy of Azerbaijan Natig Aliyev spoke of the aspects of the modern-day global energy map. The Minister also noted how proud he is to take part in implementation of Azerbaijan’s oil strategy, devised by the National Leader Heydar Aliyev. In his speech, Natig Aliyev touched upon the questions of implementation and prospects of grand projects in logistics, refining and petrochemistry, coming to life under the auspices of Azerbaijan’s president. He laid emphasis on Azerbaijan’s special role in promoting Europe’s energy security.

Khoshbakht Yusif-zade, SOCAR's First Vice President for Geology, Geophysics and Field Development spoke in detail on the company’s strategy and plans. He enlightened the Forum participants about Azerbaijan’s oil production history, the role of Azerbaijan oil in economic development of the former USSR and assuring victory in WWII. SOCAR's First Vice President also pointed out the great importance of the founder of the modern Azerbaijani state Heydar Aliyev’s role in development of the Republic’s fuel and energy sector through attracting foreign investments in Azerbaijan economy in the final decade of the past century. He stressed that the President of the Republic of Azerbaijan Ilham Aliyev pays special attention to this sector, which is why SOCAR was able to expand its operations far beyond the country’s borders. Khoshbakht Yusif-zade also shared his memories of the National Leader Heydar Aliyev with the Forum’s participants and guests.

Speaking of the strategic course of development for Azerbaijan’s petrochemical sector, Chairman of Azerkhimiya Supervisory Council Mukhtar Babayev informed the session attendees of the projects currently under way, as well as of prospective future projects in this field. He congratulated those present with the Forum’s start.

The report from Director General of SJSC Baku international Sea Trade Port Taleh Ziyadov focused on the operations and prospects of Caspian’s largest logistics center. He also remarked on the special role of the recently established free trade zone in the Alyat village in development of the country’s oil sector, and announced that its establishment allowed to significantly increase cargo trade turnover.

Deputy Head of Humanitarian Affairs Department of the Administration of the President of the Azerbaijan Republic Maherram Akhmedov, Head of Oil and Chemistry Department of the Office of the Cabinet of Ministries of Azerbaijan Asker Aslanov, SOCAR Vice-president for strategic development Tofig Gakhramanov,  BP Azerbaijan’s Vice-President Bakhtiyar Aslanbayli and Managing Director of Confidence Capital Ltd. Andrew Rudenko attended the Forum’s opening ceremony.

SOCAR International Forum is a key event in the Caspian oil calendar covering the latest trends in hydrocarbon exports from the region, providing a unique digest of trading information for strategic decisions and day-to-day operations. It aims to analyze the latest trends and possible development scenarios for cooperation in hydrocarbon trade and exports in the Caspian region and Central Asia.

More than 150 delegates including managers of SOCAR’s units and members of Azerbaijani Parliament as well as high-level officials, industry leaders, analysts, trade and financial experts, top executives, managers and representatives from ministries and transnational oil&gas companies from Georgia, Iran, Kazakhstan, Kyrgyzstan, Russia, Turkey, Turkmenistan, Ukraine and other countries participate in the event. During the three-day Forum, eight plenary sessions on various topics will be arranged.