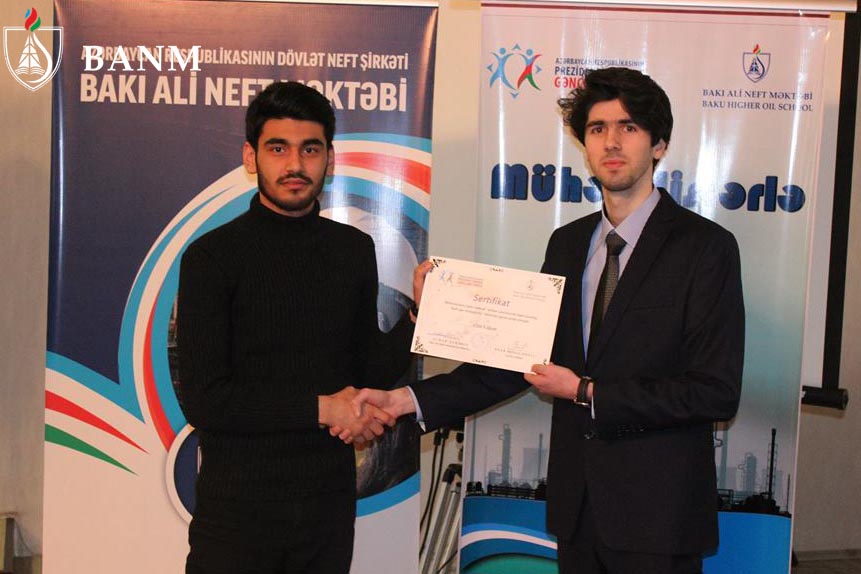 One more student project, which won 10th Grant competition conducted by the Youth Foundation under the President of the Azerbaijan Republic, has been realized at Baku Higher Oil School (BHOS). The project entitled “Future Coming with the Engineers” has been implemented by fourth-year Chemical Engineering student Anar Badalbeyli with organizational support from the Higher School.

It aimed at raising young people’s interest in engineering and their awareness of various professions available in this field, comments Anar. More specifically, the project focused on the prospects of receiving education in petroleum engineering, chemical engineering and process automation engineering, he says.

More than 300 students from national universities applied to attend training sessions within the project, and only 80 persons were selected for the participation. Staff members of SOCAR also participated in the training.

First sessions were conducted by representatives of BP in Azerbaijan including engineer Ali Naghiyev and engineer, BHOS graduate Fidan Selimzadeh who shared their working experience at this leading transnational oil company. They also told about career and professional development opportunities provided by BP for young engineers and internship and on-the-job training programs offered to undergraduates of national universities.

Senior lecturer of the BHOS Process Automation Engineering department Abbas Alili became a trainer of the next session. The participants were acquainted with the history and development of the profession of Process Automation Engineer and opportunities to receive education in this field provided by the Higher School. He also informed the trainees about scientific and practical activities carried out by BHOS process automation engineering students.

The next session was conducted by Head of the chemical analysis laboratory of the Heydar Aliyev Oil Refinery Vusala Mamedova. She provided detailed information about importance of chemical engineering for, and chemical engineers’ contribution to, economic development of the country. The trainer also informed the students about universities where they could receive education in this field.

BHOS rector Elmar Gasimov attended a meeting dedicated to the end of the project and made a speech. He emphasized that the project proved young people’s growing interest in receiving education in the field of engineering. “It is not only the future, but also the present that belongs to the young,” he said.

The project participants successfully completing the training were awarded certificates and memorable presents.