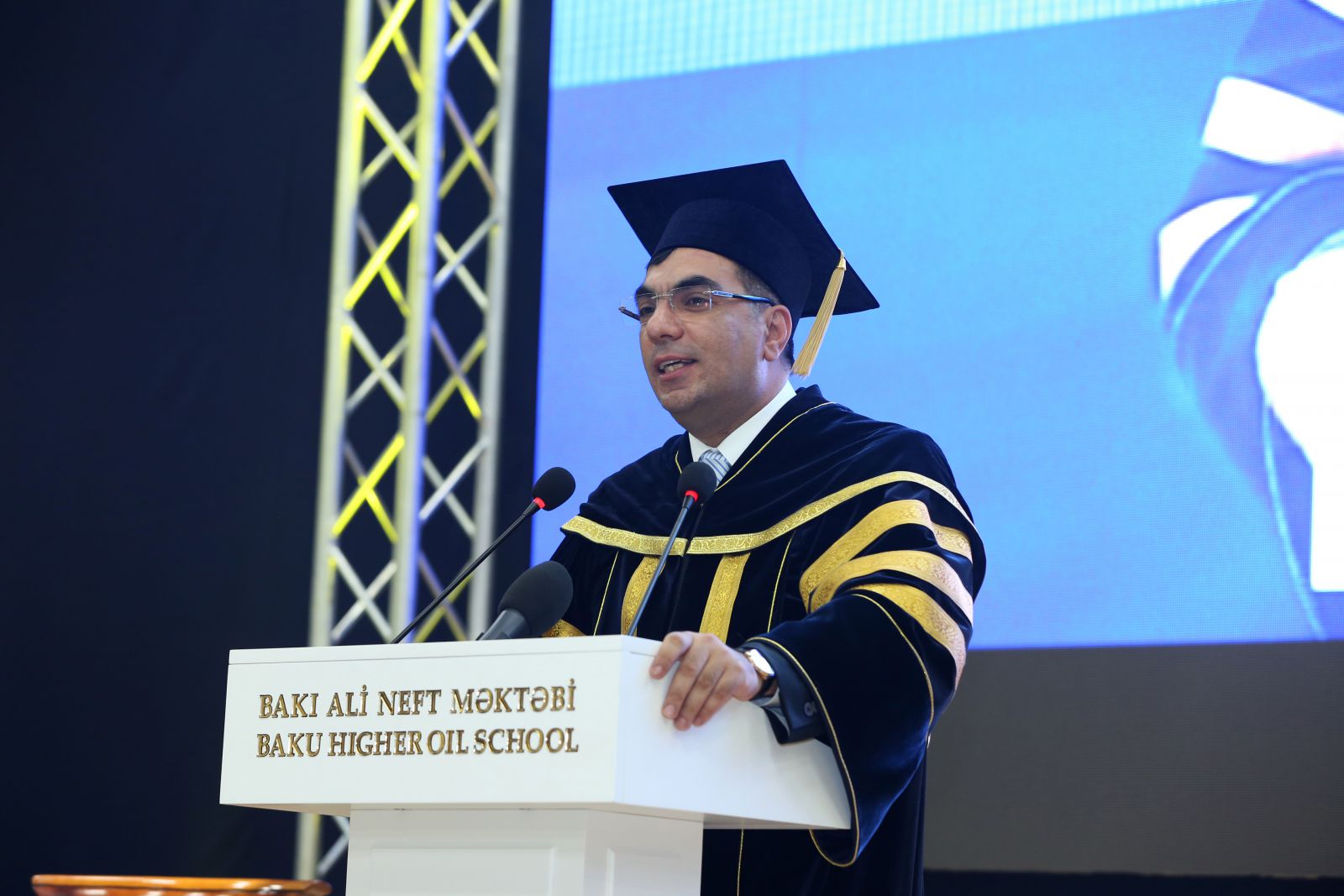 While opening the ceremony, BHOS Rector Elmar Gasimov extended his congratulations to the alumni and their families on the occasion of this remarkable day and expressed his best wishes for their success in their prospective professional development and personal endeavours. “We are very proud of the significant fact that the intelligent youth of our country, the students who scored high points during the entrance examinations held for the higher educational institutions of Azerbaijan and were admitted to Baku Higher Oil School, are graduating today. Being always distinguished by their discipline and manners as well as having achieved outstanding academic achievements, now our graduates are completing their education at the Bachelor’s and Master’s levels, thereby laying a foundation for furthering their career path and education. I wish our graduates every success in their prospective career and life’, said Mr. Gasimov.

It was also stressed during the ceremony that 80% of this year’s graduates have been already employed by the national and transnational companies, while others have been awarded full scholarships for studying at various universities overseas.

Today, the alumni of BHOS are working at the well-recognized companies such as SOCAR, Star, Petkim, BP, Halliburton, Schumberger, Maire Tecnimont, etc.

“In 2011 the honourable President of the Republic of Azerbaijan Mr. Ilham Aliyev tasked SOCAR with establishing a new higher school which will nurture English speaking oil specialists with profound knowledge of high technologies and which will meet international standards. This was a task of urgency for SOCAR then. As a result of purposeful efforts made with schoolchildren and, particularly, establishment of Baku Higher Oil School have significantly changed the situation. While accumulating the highest score during the admission examinations, candidates are inspired by the quality of education and modern education programmes offered by BHOS and give their preference to this higher school. Last year, all candidates with the highest score (700 points) in the first group selected BHOS”, noted SOCAR Vice President for HR, IT and regulations Khalik Mammadov in his speech.

BP Regional President for Azerbaijan, Georgia and Turkey Gary Jones emphasized that BHOS nurtures highly-skilled young specialists not only for Azerbaijan, but also for the region. He also expressed his contentment with the talent and qualifications of the BHOS graduates hired by BP.

The ceremony continued with the greetings from professors of Heriot-Watt University (HWU) and videos capturing the greetings, congratulatory messages and best wishes from BHOS graduates who are employed by the largest transnational companies or pursuing Master’s degree at the leading foreign universities.

This year, BHOS also has 13 postgraduate degree alumni, each of whom was awarded dual diplomas from both BHOS and HWU. Six graduates were awarded diplomas with honours. Moreover, a badge with Ramziyya Garazade’s name was placed on a symbolic tree stump, as a sign of recognition for being the best 2019 Alumni.

Delivering a speech on behalf of the graduates Process Automation Engineering student Amiraslan Bakhshili extended his sincere gratitude to the teachers who played a valuable role in their education and professional development.

Speaking on behalf of the graduates’ parents, Natella Ibrahimova, the mother of Process Automation Engineering student Eltun Ibrahimov, expressed her gratitude to President Ilham Aliyev for all the conditions and opportunities provided for their children.  “We have been internally displaced from Aghdam. Despite all the difficulties we have faced so far, my son Eltun managed to score the maximum 700 points during the entrance examinations and was admitted to BHOS with the Presidential Scholarship. After successful completion of his studies, he was admitted to the University of Cologne based on the scholarship awarded by the German government. We are also very happy that he received a job offer from SOCAR,” Natella Ibrahimova said.

The official part of the ceremony was followed by a concert where Khayal Farziyev, first year Information Security Programme student, recited some pieces of the poem “Atamin kitabi” (My Father’s Book) by Mammad Araz, whereas the Chemical Engineering graduate Tofig Shakinsky performed ‘River Flows In You’ by Yiruma on the piano and the Scottish guest Innes Moir played the bagpipe. The event continued with the performances of the Palmas band led by Chingiz Mustafayev.

The ceremony concluded with the traditional throwing of the graduation caps up in the air.