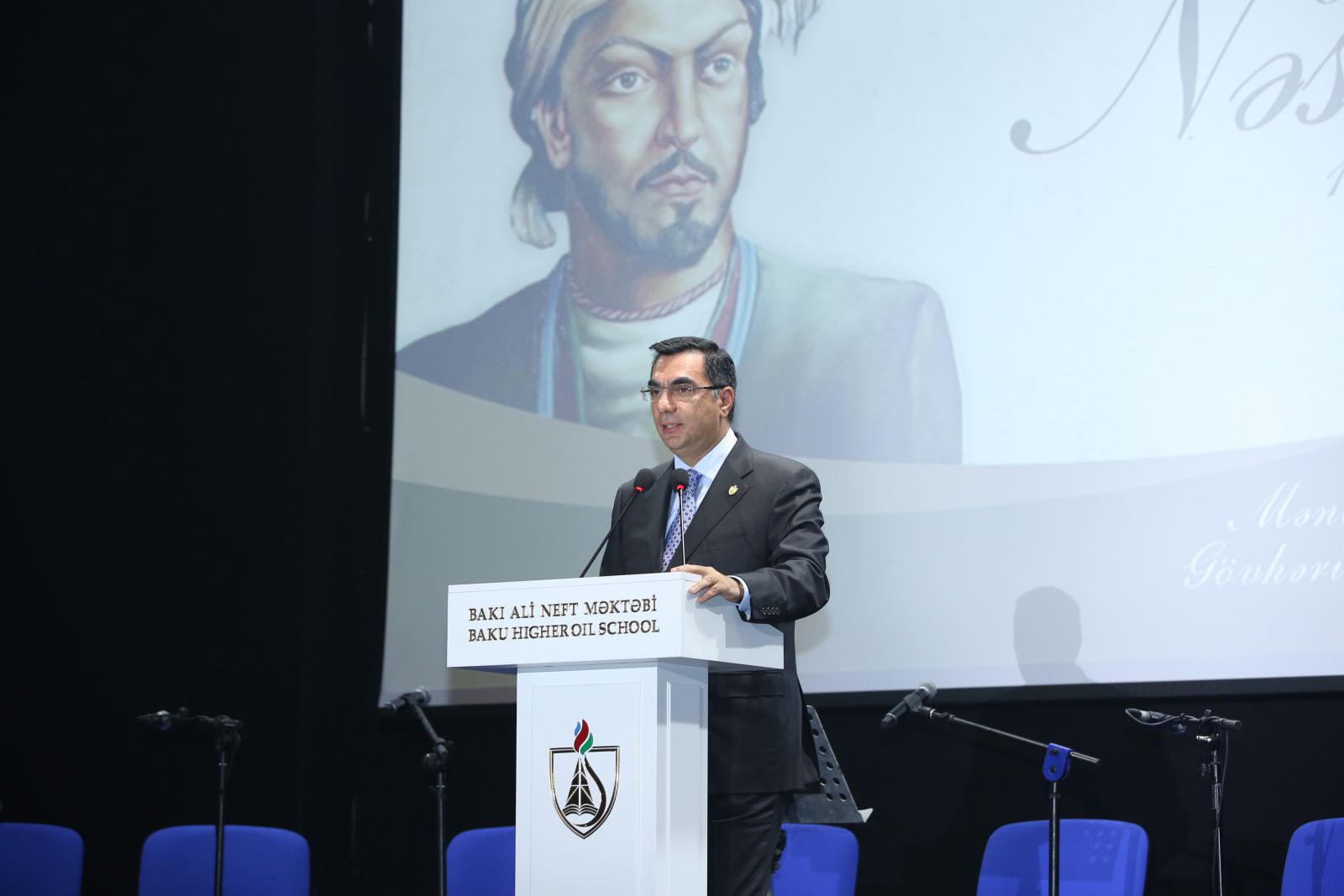 A few days ago, at the initiative of the First Vice-President of the Republic of Azerbaijan Mehriban Aliyeva and with the support of the Heydar Aliyev Foundation, the statue of the great Azerbaijani poet and thinker Imadeddin Nasimi was unveiled in the atrium of the All-Russian State Foreign Literature Library named after M.I.Rudomino in Moscow.

This event has become a matter of pride for every Azerbaijani.

In accordance with the decree of the head of state on celebration of the anniversary of Imadeddin Nasimi, Baku Higher Oil School (BHOS) together with the Azerbaijan State University of Culture and Arts (ASUCA) hosted a literary and art evening dedicated to the 650th anniversary of Nasimi.

Speaking at the opening ceremony of the literary and art evening, Rector of Baku Higher Oil School Elmar Gasimov noted that the great Azerbaijani poet and thinker Imadeddin Nasimi was a master of words who possessed  his own special style in the classical Azerbaijani poetry and made an exceptional contribution to the development of the national poetry .

“The greatness of man, personal freedom and the idea of love occupy an important place in the writings of Nasimi. His literary heritage, enriched by various ideas, had a strong influence on the writings of Azerbaijani poets who came after him and the development of the artistic and social thought of a number of peoples. We are very proud that we were able to organize an event dedicated to the anniversary of this great Azerbaijani poet within the framework of the ‘Year of Imadeddin Nasimi’”. Today, students and teachers of Baku Higher Oil School and Azerbaijan State University of Culture and Arts will perform ghazals and poems by the genius poet Nasimi, as well as compositions based on his ghazals,” Elmar Gasimov said.

Rector of Azerbaijan State University of Culture and Arts professor Jeyran Makhmudova told the ceremony about the events held at the university within the “Year of Imadaddin Nasimi”. The Azerbaijan State University of Culture and Arts held the dramatic reading competition "Hüsnü-cəmal, əqli kamal" dedicated to the poet and thinker Imadeddin Nasimi. In addition, the university prepared a mugam composition based on the poet’s ghazals,” Jeyran Makhmudova said.

Vice-President of the National Academy of Sciences of Azerbaijan, Doctor of Philology, an academician Isa Habibbeyli noted that there is no second man of art in the world who, like Nasimi, could elevate a person to the level of a divine being.

Then, students and teachers of Baku Higher Oil School and Azerbaijan State University of Culture and Arts performed in front of the audience the ghazals of Nasimi: “Məndə sığar iki cahan, mən bu cahana sığmaram”, “Könlüm”, “When my moon rises in the sky of beauty”, “Neylərəm”, “Holy Spirit”, “Shed bloody tears, eyes”, “There is only one rose in the garden of my love”, “The world  doesn’t stand still”, “Eylədi”, “Etməgil”, “Hardasan”, “Cananı mənim sevdiyimi can bilir ancaq”, “Yanaram”,“Ayrılır”, “Ey Məsihadəm, niyə can vermədin cansızlara”, “İnsan dedilər”, “Qafil oyan”, “Simayi–Şəms”; the song “Söylədi yox, yox” from the film “Nasimi” composed by Tofik Guliyev; compositions consisting of Nasimi’s ghazals, including the song “Məndə sığar iki cahan” written based on the Shur mugham. Towards the end of the event, a video requiem of the composition “Sığmazam” by Sami Yusif was shown.