News
Interview with Leman Rahimli, Holder of the Presidential Scholarship 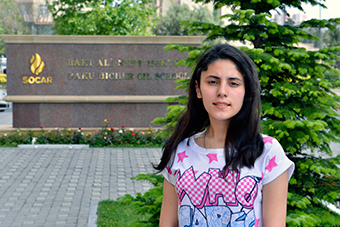 "If you think that after admission you will relax and stop studying hard enough, then you are on the wrong way, because at BHOS you should try all your best."

Laman Azamet qizi Rahimli was born in 1996 in Baku. In 2003 she entered to the primary school number214. In 2010 she entered to “Zakalar” liceum and graduated it with high grades in 2014.Laman held the 1st and 2nd place at “Zaka”intellectual contest devoted to 28th of May, Republic Day in 2009-2010 years.In 2010-2011 she won Maths Contest and in 2012-2013 was the winner of Physics contest of city tournament. In 2013 within "Ecorudit Brain-Ring" ecological knowledge contest of Baku city Laman won 3rd place. She was also awarder of certificates and diplomas of several knowledge contests. In 2014 Laman was registered in Process Automation Engineering program of Baku Higher Oil School scoring 685 points at the university recruitment exams held by the State Students Admission Commission and was awarded the Presidential Scholarship.

1. What can you say about the admission exams, what were your impressions before and after exam?

- Before exam day I experienced no stress, but as I approached the building where exam would be held I felt anxiety.When the minutes were counted before exam but during the whole exam all my anxiety vanished because I was totally concentrated on answering exam questions so that no other thought hindered me.But one thing that I remembered was the mistake I made while working on physics out of carelessness: I did calculate wrong because I didn’t read the question carefully.

2. What were your trial exams results? Did you believe that you would gain high points during entrance exam?

- Actually I was scoring over 600 points during the trials but I was expecting for the highest score. The last trial exam result was much more closer to my target score.

3. What should a prospective university student do in order to achieve over 600 points entrance score and how should one make the right choice of the relevant specialization?

- One should be aware that you need to study hard from the very early school years. You should set a goal and move forward to achieve it with the method peculiar to your own self, be self-confident and get support from your family. When it comes to the selection of specialization, first of all preference should be made in favor of favorite sphere. Consultations to be made with parents and others are helpful for researching selected specialization as well as decision making. However one should know where his/her preferences are before selection as this will be turning point of life.

4. What was your reason for choosing Baku Higher Oil School, and what were your targets while making your choice on this specialization?

- I showed interest in programing and computing long ago. I have even decided on my specialization being 8 year pupil. After the results were known I researched my specialization one more and faced dilemma between two. Then to study at BHOS I chose Process Automation Engineering specialization. My parents completely left the selection on me showing continuos support.

5. It is believed that technical field mainly engineering are peculiar to males. What do you think of it and how did you start showing interest in this field?

- Yes it is true that males make up majority in this field but female number is quite enough. The most important point is to love the field you have chosen then success will follow you. From early age I showed interest in maths and technologies and during school years applied sciences were my favourite subjects. My father is chemical engineer, perhaps it runs in my blood.

6. What are your recommendations to the prospective university students wishing to study at BHOS? How do you find the education here?

- It is necessary to achieve high entrance scores to be admitted to BHOS. It means one should study hard as studying here requires hard work. Education level at BHOS is high enough compared to other universities of Azerbaijan. If you think that after admission you will relax and stop studying hard enough, then you are on the wrong way, because at BHOS you should try all your best.

7. What are your future plans?

- Of course I have goals and wishes however curent period of my life also deserves attention and worthy living. That is why I do not think much of future as it is today that forms the future. Actually I believe there is a long education way spreading straight for me.

8. How do you spend your leisure time? Do you have hobbies?

- I like reading which binds me with literary world. As to humanities, I like history. Reading about historical events and watch historical movies are of great interest for me. In addition I like to do maths and logical tasks, watching and attending intellectual programs, playing video games and listening to the music. I do also like skating at my leisure time.