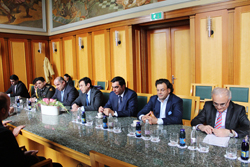 A series of events dedicated to The Republic Day were held in Slovenia.

An offical reception was organized at Mons Hotel, Ljubljana to commemorate the 96th anniversary of the independence of Azerbaijan Democratic Republic. The event was attended by the Slovenian government officials, Ljubljana City Mayor, Elmar Gasimov, the Rector of Baku Higher Oil School (BHOS), the managerial staff of the SOCAR Representative Office in Austria, as well as the Embassy and business representatives.

Welcoming the guests Galib Israfilov, the Ambassador of Azerbaijan to Austria and Slovenia, spoke about the Azerbaijani nation’s struggle for independence, as well as the achievements made since 1991, when Azerbaijan became independent.

The event continued with the performance of the young musician Chingiz Mustafayev, who sang famous Azerbaijani and international songs accompanied by Rizvan Aliyev on the tar, an Azerbaijani stringed folk musical instrument.

On a visit to Nova Gorica, Azerbaijani delegation met with Mitya Trtnik, the Nova Gorica Mayor. During the meeting, the attendees spoke about the expanding relations between Azerbaijan and Slovenia and emphasized the role of Nova Gorica Mayor’s Office and residents in boosting these relations. They highly appreciated the bravery demonstrated by Azerbaijani soldiers in liberating Slovenian territories from fascist occupation.

On May 16, Azerbaijani delegation visited Trnova district where they paid tribute to the Memorial located in the Memorial Park. Azerbaijani Ambassador to Austria and Slovenia, Rector Elmar Gasimov and Gulmirza Javadov, Head of SOCAR Representative Office in Austria, laid wreath at the monument which bore the names of 22 Azerbaijani soldiers who had been recently identified based on archival documents.

Ambassador Galib Israfilov made a speech at the event saying that it was a proud for him to commemorate the memory of Azerbaijani heroes who had sacrificed themselves for liberation of the Slovenian lands.

Mr. Javadov greeted the attendees on behalf of SOCAR and said that is was honor for them to support all endeavors, both organizational and financial, to eternalize the memory of the Azerbaijani soldiers who have sacrificed their lives for liberation of the Slovenian territories.

Rino Velikonya, Vice President of the Warriors and Veterans Council, said that Nova Gorica was once inhabited by Slavic and Romanian people, and was periodically invaded by other nations. He noted that although a lot of nations inhabited in and passed through these territories, Azerbaijani soldiers were the ones who had demonstrated extreme bravery to liberate the Slovenian people and lands from the enemies, which would never be forgotten. He added that these soldiers were regarded as Slovenian heroes and their memory would always be revered by the next generation, as the Slovenian nation owed them, as well as some other nations its existence and finally gained its independence in 1991.

Following the event, Azerbaijani delegation paid tribute to Mehdi Huseynzade, an Azerbaijani soldier, the Hero of the Soviet Union and the leader of the Slovenian Partisan War against German fascists, who was buried in the Chepovan village and laid wreaths at his grave and monument. Mehdi Huseynzade’s brothers-in-arms and ex-guerillas, as well as local public figures joined the ceremony. Necat Qrabus, the Slovenian religious leader chanted Koran in memory of Moslems buried in the cemetery.

Afterwards, Azerbaijani delegation visited Mehdi Huseynzade’s monument and museum in Shempas district where they laid wreaths on behalf of the Azerbaijani Government and SOCAR. A German made 9 mm caliber gun (ERMA M40) acquired from the well-known gun collector Zmago Yellinchich’s personal collection and once used by Mehdi Huseynzade, was presented to the memorial museum.

The Manager of the museum expressed gratitude to Azerbaijani businessman Arthur Abdinov for supporting the re-installation of the security system and other measures taken at the museum.

SOCAR delegation also paid tribute to Tagi Aliyev, Mehdi Huseynzade’s brother-in-arms, nicknamed "Tolya," who was buried in Renche district. Rector Elmar Gasimov and Mr. Javadov laid a wreath at the monument. Rayko Slokar, the Ex-Director of Nova Gorica Library and Ivan Trop, Head of the Commission for Historical Cemeteries and Monuments of Nova Gorica, recounted the stories of the Azerbaijani soldiers and promised that they would do their best to eternalize their memories. They also thanked SOCAR Representative Office for supporting the efforts to reconstruct the memorial complex.

It is worth to mention that the Embassy of Azerbaijan is implementing the programme called Tracking the Heroic Path of Azerbaijani Warriors which is aimed at collecting information about and reconstructing the graves of the Azerbaijani soldiers who once fought against fascists in Slovenia and Northern Italy, which in its turn also increases public awareness.

The event held in Ozelyan district and attended by the members of Azerbaijani-Slovenian Friendship Society, was followed by the awarding ceremony and musical performance.