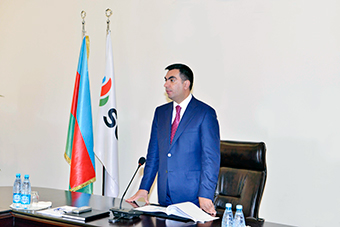 The first meeting on 2015/2016 Academic year presided by BHOS rector Elmar Gasimov was held at Baku Higher Oil School. In his opening address rector Elmar Gasimov underlined the fact that works are going on throughout the whole year at BHOS. He also said that BHOS, which has been functioning 4 years, would be pleased again to welcome new students. Touching upon the attachment of special significance to Baku Higher Oil School by the President of Azerbaijan Republic Mr. Ilham Aliyev, rector Elmar Gasimov pointed to the trust manifested by head of state towards BHOS. BHOS rector also reminded that this year average entrance point, necessary to gain to be admitted to BHOS, was as high as it was within previous years making up 676. He particularly said that points referred to petroleum engineering specialization raised from 672 to 679, chemistry engineering from 657 to 668, process automation engineering 684 to 685. Rector stated that today's achievements by BHOS are worth praising. Elmar Gasimov also mentioned that 3 students who gained 700 points during entrance exam selected BHOS and this is the results of joint endeavors of all BHOS staff members. Rector also mentioned internship issue saying that BHOS second and third year students took summer internship at SOCAR and other transnational companies. He said that payment based internship turned out to be very motivating for third year students. Emphasizing how important summer internship is for students' development as professional engineers, Elmar Gasimov stressed that this gained experience would also be crucial for students' formation as competitive petroleum engineers in future.

Rector Elmar Gasimov spoke about new campus of BHOS construction of which is close to completion. Elmar Gasimov gave certain instructions to heads of departments and lecturers. He also said that opening of new centers and acquisition of new laboratories were envisaged.

Rector specially thanked head of e-training department Sharif Khurshudov for his efforts as a group leader specially recruited for registering BHOS prospective students who were admitted to study at BHOS in 2015 via Students' Admission Committee and supervising documents' submission in accordance with regulations.

Rector instructed all staff members to strictly observe disciplinary regulations. Elmar Gasimov also informed about dress code according to the SOCAR's corporative clothing standards came in force on August 1 and which should be followed by all staff members of SOCAR and its structures. In this connection two presentations were made by Habiba Sadiqli, head of students' affairs department and Elnur Safarli, representative of e-training department. Meeting followed by questions and answers session.