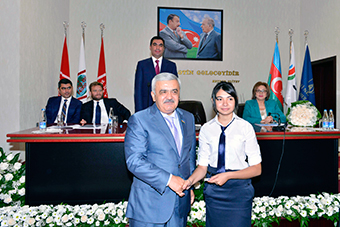 Isa Mammadli was born in Baku, on September 25, 1998. He graduated with honor the secondary school N163 of Baku in 2015. During the school years he took part in various events, knowledge contests and camp activities. In addition, he participated in various school events as a presenter, participant, organizer and designer. Having gathered 700 entry points during the exam, he was admitted to the Petroleum Engineering Programme at BHOS.

Arzu Hasanli was born on April 2, 1999 in Barda town. She graduated with honor the Technical Lyceum named after Academician Zarifa Aliyeva in Barda in 2015. Throughout the whole education period, Arzu demonstrated high educational performance and was awarded honorary certificates. She has always been an active participant of public events held in our country. Arzu worthily represented her lyceum in knowledge contests held nationwide. She was admitted to Process Automation Engineering Programme at BHOS after having gathered the highest 700 points.

Nihad Abbasov was born on January 5, 1999 in Sumgait. He graduated the secondary school named after Isa Mammadov in Gubadli region as an “A” level student in 2015. During his studies, he took leading places as a participant of various contests. At the same time he participated in INEPO International Project Olympiad and Scientists of Future Contest. With 700 points gathered during the entrance exam he was admitted to the Petroleum Engineering Programme.