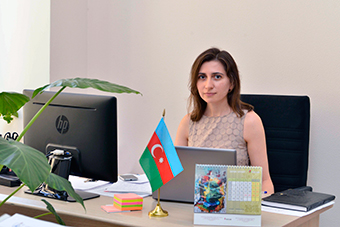 Dr. Habiba Kalantarova (PhD in Mathematics from University of Bonn) is appointed Associate Professor at BHOS, SOCAR, after a long period of studies and research activities in Turkey and Germany.Habiba Kalantarova was born in Baku and attended the secondary school No.158. Then she continued her education at Ankara Yüce Science High School, Turkey.From 2002 to 2005, Habiba Kalantarova studied at the Department of Mathematics of Boğaziçi University, Turkey and obtained a B.Sc degree. Then she continued her studies at Koç University, Turkey and received her Master’s degree in 2007. During her graduate studies, she was granted full scholarship and her Master’s thesis was dedicated to the Schrödinger-Newton System.

Since July 2015, Dr. Kalantarova has been working as an Associate Professor at SOCAR, BHOS Petroleum Engineering Department.