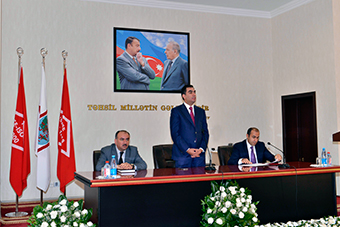 The event dedicated to “Oilmen’s Day” celebrated September 20 and the meeting that gathered first year students and their parents were held at BHOS. The higher school rector Elmar Gasimov congratulated Azerbaijani oilmen, BHOS lecturers and students. Rector emphasized that September 20 started to be celebrated as “Oilmen’s Day” in accordance with National leader, Haydar Aliyev’s order issued August 16, 2001. He particularly stressed that 21 years have passed since the signing “The Contract of the Century” September 20, 1994. Initiated by National leader Haydar Aliyev this Contract defined the main energy strategy of Azerbaijan turning our country into one of the leading global oil exporters. Touching upon Azerbaijani government’s policy pursued in the development of energy and petroleum sector, Mr. Gasimov pointed out that this policy is progressing owing to successful oil strategy backed by President Ilham Aliyev.

BHOS rector added that based on decree of the President of Azerbaijan Republic the State Oil Company of Azerbaijan Republic (SOCAR) was established in 1992 in order to use oil resources of Azerbaijan in line with government’s policy, improve management structure of oil industry and carry out large-scale scientific and research projects. Elmar Gasimov briefed on the history of Baku Higher Oil School founded within SOCAR, activities of the higher school and successful achievements in the course of short period of time. Focusing on President Ilham Aliyev’s order on establishing BHOS, Mr. Gasimov stressed that the goal “We should turn oil capital into human one” had already been achieved. While speaking about Baku Higher Oil School standing out for educating highly qualified, English speaking specialists and its authority, BHOS rector reminded that minimal entry points necessary to be admitted to BHOS for Academic year 2015/2016 made up 659. He also said that one of BHOS goals is to increase the number of Azerbaijani specialists working for oversea companies. Rector underlined that education at BHOS is realized in accordance with Academic programmes of Heriot-Watt University, UK. Elmar Qasimov also said that the development of oil and chemistry complexes in Azerbaijan aided development of non-oil sector as well. BHOS rector emphasized special importance attached by BHOS to internship taken by students and informed that BHOS students enjoy opportunity to take internship at SOCAR and its structures, BP, Halliburton, “Petkim” Company, Turkey etc. He said that in order to facilitate students’ socialization process BHOS organized socially oriented events.

Mentioning the continuing construction of BHOS campus rector said that BHOS students would study at the campus with the most advanced procurement in the whole region. Mr. Gasimov said that for Academic year 2015/2016, 102 students were eligible to get Presidential Scholarship and out of 25 students, the winners of this scholarship from the first specialization group, 17 ones are BHOS students. Elmar Gasimov once again congratulated BHOS students and their parents on the occasion of the start of new academic year. He advised students to be active both in their academic and social life.

Sevinj Qafarli, BHOS third year student on chemistry engineering programme awarded by Heriot-Watt University UK as one of the best students for 2014/2015 Academic year, including “Honorary Certificate” and pecuniary award, Kamran Rzayev, BHOS third year student studying process automation engineering and the winner of the trip to Romania as a participant of “SOCAR Summer School”, Pakiza Pashayeva, BHOS second year student from the same specialization, Kamran Aliyev who with BHOS support studied at Heriot-Watt University during one semester, spoke about broad opportunities offered by BHOS to students. Studied at UK London Imperial College via SOCAR scholarship for education in foreign countries and currently working as a senior lecturer at BHOS chemistry engineering department, Sanan Eminov, thanked all people who ever helped him. Stressing the importance of support to be rendered to students Mr. Eminov said that he would be pleased to share his knowledge with students.

The meeting proceeded by Rector Elmar Gasimov’s responses to questions raised by parents. He drew attention to their proposals and gave appropriate instructions. In conclusion newly admitted BHOS students were granted notebooks.