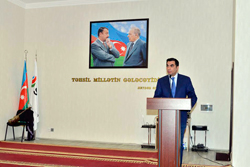 An event dedicated to commemoration of the 25th Anniversary of January 20 Tragedy was held at Baku Higher Oil School (BHOS). The event was attended by the faculty and students of the school.

The event started with the National Anthem of Azerbaijan Republic.

Making an opening speech, Elmar Gasimov, the Rector of BHOS recounted the episodes of the tragedy where many civilians had been brutally slaughtered adding that the January 20 Tragedy, the bloodstained history of Azerbaijan, would eternally live in the memories of Azerbaijani people and people who had sacrificed themselves for the independence, sovereignty and liberation of our country had already been engraved both upon the history and memory of the nation. He also emphasized the fact that the 20th of January was not only the National Day of Mourning, but also the day of honor for the Azerbaijani nation, because on that day our people fought for the national sovereignty and reached the peak of martyrdom leading to the birth of independence of Azerbaijan Republic. He also noted that over the past years, the government had investigated and made a legal evaluation of the historical, moral and political aspects of the Black January Tragedy and made great efforts to make sure that the criminals were punished. He said that this tragedy was recognized by the international community and annually commemorated not only in Azerbaijan, but also in other countries as a result of the significant efforts made by the National Leader Haydar Aliyev to demand institution of criminal proceedings and his vehement protest against the criminals. The international community was kept thoroughly informed about the horrific tragedy caused by the Soviet Army. Later, he mentioned the speech of the National Leader Haydar Aliyev stating "We are proud of our victims who sacrificed themselves for the liberation and independence of our homeland. They will eternally be living in our memories", and called the youth to protect our homeland.

The attendee’s stood in a minutes’ silence to commemorate the memory of the victims.

The ceremony continued with the performance of the Center of Young Tourists and Ethnography members dedicated to the January 20 Tragedy.

Prof. Ramiz Humbatov, Vice-Rector for Education, Science and International Relations of BHOS and Prof. Arif Mammadzadeh, Head of the Petroleum Engineering Department, shared their memories about the tragedy saying that 25 years ago the Azerbaijani nation experienced terrible and shocking events and fell a victim to the aggression of the Red Army of the Soviet Imperialism which mercilessly slaughtered hundreds of innocent people using their tanks and other ammunitions. They called the Azerbaijani youth to come together and do their best to ensure that the criminals are punished. They also noted that under the leadership of Ilham Aliyev, the President of Azerbaijan Republic, the authorities did their best to ensure that the tragedy and sorrow experienced by the Azerbaijani people were recognized by the international community and the criminals were punished.

The event ended with the video film made by the second year students.