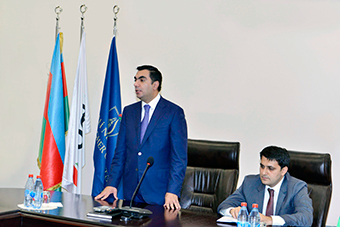 Welcoming the guest BHOS rector Elmar Gasimov thanked him for accepting the invitation. Mr. Gasimov reminded that today football, as a popular sport, turned to be the spotlight of global community constituting one of the integral parts of human leisure. Mr. Gasimov stressed that the attention paid Ilham Aliyev, the President of Azerbaijan and SOCAR management to sport, particularly to football, resulted in the great comeback of Neftchi FC. Rector also focused on local players involved to Neftchi FC, and underlining the role of fans’ club in the success of the game the Rector positively evaluated active BHOS fans joining Neftchi Fans Club. He also stressed that an immense stadium was built at the premises of BHOS new campus considered not only for BHOS football teams, but also for holding the national football matches in future. E. Gasimov also pointed the significance of BHOS being not only an educational center, but also a platform for young people to demonstrative their sportive skills.

Mr. Mammadov in his turn said he was pleased to be at the leading higher school of the country and meet intellectual young people. He spoke about the activities, mission and vision of Neftchi FC, as well as the attention and care of the Azerbaijani government to development of football.

Then the students had the opportunity to bring forward their questions and suggestions. In conclusion of the meeting, symbolic gifts associated with Neftchi FC were presented to BHOS and the students.