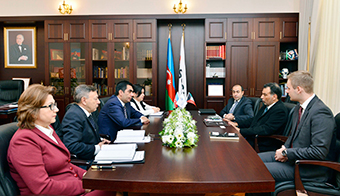 Head of Afnan International Holding Company, Kuwait, Mr. Mubarak al Jassim visited BHOS. BHOS Rector Elmar Gasimov greeted the guest and said he was glad to welcome him. Informing guest about the history of BHOS Mr. Gasimov said that the higher school was established under SOCAR in 2011 according to the decree of the President of Azerbaijan Mr. Ilham Aliyev. BHOS Rector made known that BHOS mainly aimed at education of highly qualified engineers for petroleum and chemical industry. Mr. Gasimov also stressed that BHOS focused on realization of President Mr. Ilham Aliyev’s saying “We should turn oil capital into human capital”. Rector said that BHOS offered free of charge education and all courses were conducted in English language being in line with the educational programmes of Heriot Watt University, UK. At the same time the guest was informed that professors of Heriot Watt University supervised exams conducted at BHOS and assessment of students’ knowledge was transparent. BHOS Rector also pointed out that the top students of the country were admitted to study at BHOS and the number of BHOS students who were winners of the Presidential scholarship was increasing every year. Mr. Gasimov also brought to the notice of the guest that in terms of average index related to entrance scores BHOS occupied the leading positions.

Touching upon the issue of BHOS new campus Rector familiarized Mr. Jassim with its project emphasizing that the construction works were nearly completed. BHOS rector also said that the students of the higher school enjoyed the opportunity to take payment based internship at SOCAR, Total, BP, Schlumberger, Emerson Process Management, Statoil, Schneider Electric, ABB, Halliburton and other international companies. Underlining that Azerbaijan had 100 year experience in the field of oil engineering BHOS Rector particularized that in order to maintain competitiveness education and training of highly qualified specialists was of utmost importance. Rector assured the guest that the mentioned companies were pleased to cooperate with BHOS and he also assured the guest that he was ready to render any assistance in connection with the establishment of higher educational institution in Kuwait.

Head of Afnan International Holding Company, Kuwait, Mubarak al Jassim extended his gratitude to BHOS management for receiving him. The guest said that it is his first visit to Azerbaijan and he found Baku very astounding city. Mr. Jassim said that he was an engineer and informed about the company he was representing. Talking about his intention to establish the new higher school for education nationals for the petroleum sector in Kuwait, Mr. Jassim focused on the international cooperation being important for intensification of petroleum related training throughout the gulf region. In this connection he decided to visit BHOS to learn experience of the higher school in details. Mr. Jassim expressed his hope related to commencement of the bilateral cooperation as well as possibility of realization of students’ exchange. Discussions concerning establishment of mutually beneficial relations as well as other issues were held during the meeting. Then Mr. Mubarak al Jassim visited some classes at BHOS and met professors and students of the higher school.