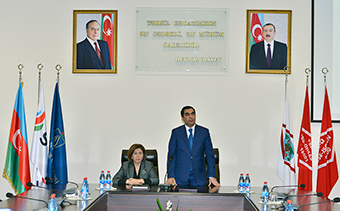 Opening the event BHOS Rector Elmar Gasimov spoke about Haydar Aliyev’s remarkable role in the history of Azerbaijan, calling him a wise statesman and politician focusing on a long-term vision. “Haydar Aliyev had an outstanding life experience which the Azerbaijani nation will never forget” said Mr. Gasimov emphasizing that the National Leader devoted his life to his nation, while his rich political experience became a real public management model. “He lived for the sake of his nation and considered his public services as the meaning of his life. The people loved and honoured him, while giving their full support to the policy he pursued. Today, Azerbaijan is successfully developing under the presidency of Ilham Aliyev, the successor of the National Leader’s ideas” the Rector emphasized.

Afterwards, Mrs. Bahar Muradova, Deputy Chairman of the Parliament and Chairperson of the Human Rights Committee briefed on Haydar Aliyev’s outstanding role in the history of the country as well as his significant services to contribute in the future development of Azerbaijan. She said that during Haydar Aliyev’s presidency, under the policy directed to improvement of various national sectors a significant number of programmes and projects had been realized with the view to ensure the development and stability in the country. “Haydar Aliyev was together with his people during the very hard and challenging moments when the people called him to take the presidency post which further led to the beginning of the period of stability, prosperity and development. Today, President Ilham Aliyev follows the political legacy policy initiated by the National Leader. Eventually, Azerbaijan is confidently moving forward the prosperous future that Haydar Aliyev dreamed about” underlined Mrs. Muradova.

Finally, a film dedicated to the National Leader’s memory showing his outstanding life experience was demonstrated.