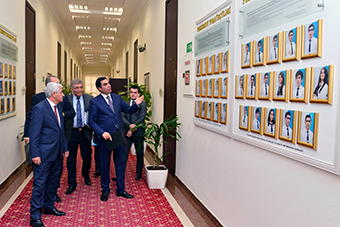 Baku Higher Oil School (BHOS) held an event dedicated to Kitabi- Dede Gorgud Epos, the national treasure. Before the official part of the event, the participants held a minute’s silence to mourn the oilmen who tragically died in the accident that happened on rig #10 of Gunashli Oil Platform. BHOS Rector Elmar Gasimov addressed the students calling them to further honor the memories of the lost oil workers with their strong efforts and hard work to become professional petroleum engineers. Welcoming the representatives of Azerbaijan Knowledge Foundation, the Rector expressed his honor of seeing them at the higher school underlying the importance of holding such events regularly. “The work implemented by the Foundation with the view of promoting the national and cultural values among the young people deserves great appreciation. Promoting the values expressed in Kitabi-Dede Gorgud Epos among students is of utmost importance” Mr Gasimov said.

Then, Oktay Samadov, Knowledge Foundation CEO, took the floor and briefed on the history and activates implemented by the organization, emphasizing that awareness raising was the principal direction of their mission. “According to the Decree of Ilham Aliyev, President of the Republic of Azerbaijan, this year, we celebrate 200 years anniversary of the studies dedicated to Kitabi- Dede Gorgud Epos, an old written epos of the folk literature of Azerbaijan, first translated by German Orientalist Heinrich Friedrich von Diez” said Mr. Samado, also speaking about relevant public awareness raising and promotion activities carried out by the Foundation, as well as the projects implemented in Baku and the regions, calling the students to join the volunteer groups of the Foundation. Briefing about certain projects to increase the young people’s reading interests, Mr. Samadov noted that significant events had been organized in this regard, additionally, emphasizing certain national and international projects realized with the auspices and support of the Foundation. “We are committed to collaborate with BHOS” said Mr. Samadov.

Later, Prof. Mukhtar Imanov, Director of the Folk Institute of the National Academy of Sciences (ANAS) made a presentation on Kitabi-Dede Gorgud Epos and the Statehood Policy. Talking about the parts of the epos he gave the explanation of various definitions such as the nation, motherland, army, government and its emblems and symbols. Prof. Imanov also talked about formation of the statehood and public status that were depicted in the epos, emphasizing the importance of studying this masterpiece under UNESCO’s support, as well as the significance of its concept, ethic and philosophic qualities and global value. Focusing on artistic traits of the epos Prof.Imanov also briefed about the history of the written literature of Azerbaijan calling the epos as a very epic one in terms of its idea, content and artistic description.

The speeches were followed by Q&A session.