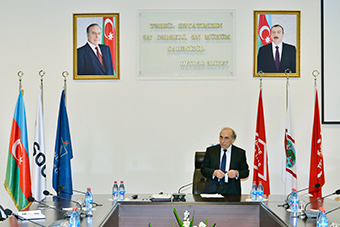 Professor Valiyev made presentation on the topic dedicated to ‘Science and Religion’. He particularly stressed the importance of the topic from the point of view of time and formation of society. Prof. Valiyev particularized on diverse research directed to scientific and religious approaches. He drew attention of the audience to the fact that the topic in question had always been spotlighted during the times of antiquity, medieval period and especially during the time of the advent of science and scientific discoveries. Mr. Valiyev said, ‘Science and religion are two forms of social consciousness’. Speaking about knowledge and faith, Islam and science, scientist and religion and fanaticism Fuad Valiyev unfolded the meanings of the above words providing explanations. Prof. Valiyev cited Quran, the holy book of Muslims. The meeting proceeded with questions and answers session involving lecturers, professors, students and quests.

It should be noted that the club mainly aims at informing students, young scientists, lecturers and specialists on new achievements, current challenges and perspectives of diverse sciences and engineering involving them in scientific discussions and encouraging them to be more interested in scientific and research work while fostering creativity, debating and presentation skills. In future, the club will engage leading science people, local and foreign specialists and managers of various enterprises in order to deliver lectures on challenging topics. Moreover, organization of round table discussions, students’ presentations on science, technology and humanities, discussions of research work and information exchange would also be a part of the club’s future activities which will be open for everyone interested in joining the discussions.