News
Elnur Safarli: The obligation of every youth representative is fulfillment of his or her civic duty 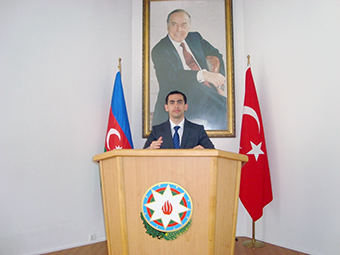 Elnur Safarli was born February 6, 1989 in Baku. In 1995 Elnur was admitted to study at school with English language bias N27 and in 2001 after gathering high points during examination held by Baku Private Turkish High School he continued his education in Dede Gorgud Private Turkish Lyceum. As the pupil of secondary school Elnur took the first place during the contest on the history of Azerbaijan held amongst pupils representing seventh, eighth and ninth forms and was the winner of six diverse scientific intellectual contests. He was awarded 10 diverse honorary certificates. In general he was awarded 48 honorary certificates. At the same time Elnur was selected as a member of Azerbaijani youth team on mathematics. Having successfully finished lyceum in 2006 and after gathering high entrance points Elnur was admitted to study at Azerbaijan State University of Oil and Industry (former name Azerbaijan State Oil Academy), the faculty of production process automation, Bachelor level. In 2010 he completed education in the said university and with financial support from the government he continued his education in Dokuz Eylul University, Turkey, faculty of computer engineering, Master level. After defense of scientific work on ‘Developing a tool for analysis of software and evaluation of software developer’ and gaining 4 points out 4 given as a maximum one in this field Elnur finished his education with the high level distinction being the best in Turkey. Since 2014 Elnur Safarli has been PhD student of Azerbaijan National Academy of Sciences, the institution on information technologies. In 2015 he was awarded youth certificate in the field of education. Currently Elnur Safarli works for BHOS e-training department. The primary goal of all young people studying abroad with financial support from the government should be applying knowledge they gained abroad in our country. Now young generation should demonstrate this. Our interlocutor Elnur Safarli assured us in this connection.

- How did you come to take interest in your specialization? How did you decide to continue your education abroad?

- I started taking interest in my specialization as a little boy. At lyceum during informatics classes I used initial programmes of Pentiun 3 computers. When applying my math related knowledge in the field of informatics I started using programming languages. When for the first time I attempted to write math formulas in ‘pascal’ programming I felt as if I were specialist. As the time passed by I started to feel more fondness for this specialization and decided to be specialist in this field. My parents wanted me to be a physician. Then I started realizing that education gained here was not enough to be true specialist. Taking into consideration conditions offered by our government for students’ education abroad I made up my mind.

- What are the advantages and disadvantages of education abroad compared with the education gained in Azerbaijan?

- In general, functioning period of well-known foreign universities many times exceeds the independence period of Azerbaijan. Along with establishing stability in Azerbaijan after the return in 1993 our National leader Haydar Aliyev attached special significance to education. As for the phase of substitution of scientists working in Azerbaijan with the young ones it started with the implementation of the order of the President of Azerbaijan Ilham Aliyev related to programme on education in foreign countries. Availability of contemporary laboratories, compulsory internship in foreign companies, engaging of students in scientific and technical conferences via encouraging awards, availability of professional professors’ staff, availability of diverse librarian recourses etc. make up advantages of education abroad. Education abroad place students in such an environment in which they unconsciously get interested in scientific novelties and publish scientific articles. My scientific research on evaluation of programmer`s effectiveness carried out in Turkey was published by ‘Lab-publishing Group’, German publishing company and was put up for sale at various e-book sale centers in 40 countries in July 2014. However I do believe that along with ensuring education higher educational institutions should teach students right attitude towards home country, awakening the feeling of patriotism and fidelity to own state. In this direction education system in Azerbaijan is better than in foreign countries.

- Where did you start your working activity and do you remember the amount of your first salary?

- When I was the second year student I was following the vacancies announced by many companies to apply for job. I admit that perhaps they didn’t even look at my CV knowing that I was only second year student. Despite this I continued to apply for job and CATEL MMC company replied to my request. I started my half-time work as the programmer at “Billiq” office after job interview and tests. My first salary amounted 370 manats.

- What about your work at BHOS? Could you tell us about your responsibilities and how do you cope with them?

- While I was studying in Turkey I always followed the news coming from Azerbaijan namely the news relating to changes. I was very proud whenever I heard about establishment of new higher schools, the use of new technologies and new laboratories in the institutions of Azerbaijan. Glad I was when I learned from mass media about establishment of Baku Higher Oil School according to the order of the President of Azerbaijan Republic Ilham Aliyev. I continued receiving information about the works carried out at BHOS, education offered there, the realized projects and the international programmes our higher school joined. I witnessed how BHOS was truly justifying hopes of our President and our youth by taking right steps. I highly valued job offer I got from BHOS rector Elmar Gasimov upon my return to home country and I started working here. On my own example I saw the raising authority of our higher school and the trust demonstrated to the young employees. It has been two years since I started my work at BHOS. I do my best to share knowledge I gained abroad with the students. Working for E-training department we exert efforts to realize innovative projects concerning education and provide conditions for conducting classes with the use of the contemporary technologies. We applied biometric registration of students’ attendance at BHOS for the first time amongst all higher schools. Working for education field encompasses challenges and forms responsibility in people. Because people involved in this field should assume responsibility on formation of Azerbaijani youth. I think everyone who does his or her job there should approach it very responsibly. Education institution is the venue where the influence on gene pool of nation and its development starts. Therefore everyone involved should realize education process with due attention thinking about the future of the nation. This process makes us even more responsible. Sharing our knowledge gained abroad and scientific novelties with Azerbaijani youth is our civic commitments with respect to Azerbaijan. The primary goal of all young people studying abroad with financial support from the government should be fulfillment of his or her commitments with respect to Azerbaijan.