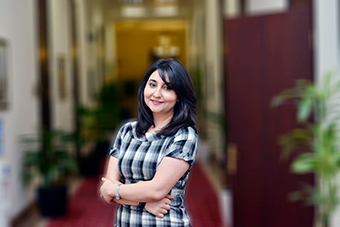 Ayten Shadlinskaya was born in 1984 in a large family. In 1988, due to known events Ayten and her family moved to Baku. All her brothers and sisters hold degrees from various universities. After graduating from secondary school No.283, Ayten was admitted to Faculty of Translation at Azerbaijan University of Languages which she graduated with distinction in 2006. After mastering the language Ayten decided to test herself in another field. In 2007, she was admitted to MBA at Khazar University and in the frames of Erasmus Mundus exchange programme Ayten continued her studies at Alexander Technological Educational Institution, Thessaloniki, Greece. From 2009 to 2013 she worked as the Director of the Center for International Students and Scholars at Khazar University. Ayten has been working as the specialist of BHOS Quality Assurance Department since 2013.  In 2013- 2014, she delivered lectures for master students at Azerbaijan Tourism and Management University.

- How would you explain your interest in your major? How did you come to a decision to study abroad?

- Studying abroad was one of my childhood dreams and I have always been waiting for the right time and opportunity to make it come true. Although translation is my first specialization, I was further professionally engaged in management and diverse education projects, thus decided to switch to business administration. Currently, I am interested in educational and development projects. I simply enjoy turning every idea into a project, especially if these projects serve to improve people’s life and education. And you never feel tired if you enjoy what you are doing, and this goes beyond the notion of the job functions. For instance, the first largest project that I developed together with my other two colleagues was called . While working on the project we rather thought about how beneficial our efforts would be for changing people’s life than the chances for the project to be selected. It was the very reason that motivated us. As expected, the project was selected and financed by the European Commission. I believe if you put the best of you in your endeavors they will be crowned with success. Every effort underpinned with good intentions finds its way to success. No doubt it requires hard work and serious efforts.

- What are the advantages and disadvantages of studying abroad compared to the education in Azerbaijan?

- I think there is no ideal education system or ideal surroundings. Whatever is the environment you are surrounded by you should make maximum efforts to use your intellect and the available chances. There may be the advantages and disadvantages of studying in local or foreign higher institutions. Studying in well-recognized universities abroad may turn to be very beneficial for industrious people; however, it can turn to be a tragedy for lazy ones. Along with professional development, studying abroad fosters self-discovery. In general, it helps you to increase your outlook, making your academic knowledge more profound and you more mature. I did not find any disadvantages in this regards. I had a lot of business and study trips during my study period and afterwards. They were really helpful for my professional development. I think that self-improvement has no age limits, as this is a nonstop process which we always feel necessity for. An intellectual person will never be satisfied of his or her knowledge and competences. Such people work constantly looking for new horizons.

- I am very happy that I started my professional career at the age of 19 and more importantly, my functions and responsibilities always corresponded to my majors. Indeed, it was a real help for enhancement of my theoretical knowledge along with professional development. It is worth mentioning that the first job turns out to be very significant in people’s life. Apart from attending the classes during 16 months period spent in Greece, I gained some work experience, too. I had a four months experience at ATE Bank, one of the largest banks of Greece, and at an international company dealing with property development and sale. As regards the salary, I do remember its amount. I would advise everyone who takes initial steps in his/her career to think primarily about the perspectives and development opportunities offered there as a priority.

- How did you start working for Baku Higher Oil School?

- Baku Higher Oil School is the first higher school in Azerbaijan majored in engineering and delivering the programs in the in English language. I was aware of BHOS since the time it was established.  BHOS rector Mr. Elmar Gasimov offered me to work at Quality Assurance Department. I was really impressed by highly qualified professional academic staff and the atmosphere of the higher school which was recently established. The environment where I could apply my experience and competences encouraged me to join BHOS where I believed I would be able to realize my ideas. I have been working for Quality Assurance Department for two years now. I should underline that personal development also depends on where you work. It pleases me so much that I am working for the educational institution with a clear vision open for novelties and supporting and motivating professional improvement of its employees. I am convinced that my country is becoming even stronger owing to the care and attention given to education. The power of every country is measured by the level of its education. As Nelson Mandela ones said, “Education is the most powerful weapon to change the world”.

- What are your job functions and responsibilities and how do you manage them?

- Our department is dealing with the most important duties which serve as the foundation principles of the higher school. Our functions and responsibilities include ensuring education quality, smooth examination process, student attendance supervision and other essential issues. Moreover, during my work period here, I developed two successful projects selected and supported by DAAD.  One of them, Baku Winter School Project, was realized in March, 2014. For two weeks period, the students from top German universities participating in the project gained specific academic knowledge at BHOS and got acquainted with the culture, traditions and picturesque nature of Azerbaijan. The second one, Baku Sumer Oil School Project will take place in September, 2016. I have to underline that Azerbaijani students may also apply to join this project. There will be more large projects supporting development and internationalization of BHOS in future.

- Could you go into the particulars of your responsibilities as a young employee?

- For me, apart from being just a responsibility, working for a higher school and playing role in education of young generations is a sacred duty. Making contributions in development of BHOS bringing benefits with every new project is a very responsible and important task.

- What else do you do for your further development outside your job at BHOS?

- Along with studying abroad, I’ve been participating in a number of conferences, workshops and trainings held in various countries. Every training or workshop I joined provided me with new knowledge creating an opportunity to meet new people and generate new ideas.  I set a goal to join at least one event per year. The last workshop I participated in was on Project Management and held in Delhi, India in 2014. The one month project was financed by the Ministry of Foreign Affairs of India. In fact, it was the most memorable event for me, as compared to many well developed countries that I visited, India impressed me deeply. Even though it was my second visit to this country, I was able to learn India more closely. Witnessing people living in luxury and the poorest ones at the same time was taught me plenty of things about life. Moreover, it was very interesting to find yourself amongst people coming from some thirty different countries, meet them and discovering diverse visions during the training. I was the only Azerbaijani who joined the program.  At the end of the training, along with the Participation Certificate awarded to all attendees, I also got the Best Leader award as a result of the questionnaire held among the participants.

I also think that reading is a very important factor for personal development. I would say that if what you learned and experienced did not help you to become a good person and a responsible citizen, it means the wrong direction had been chosen. As the expression goes “literate ignoramus” is the most dangerous person. Now, I mainly read the works written by the oriental thinkers and Indian authors. I consider reading and travelling as significant factors helping people to develop.