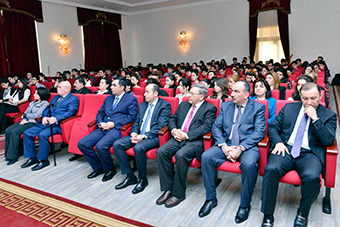 The event to commemorate the 24th anniversary of Khojali tragedy ‘Khojali – Bloody Memory’ was held at BHOS. The event gathered the head of Azerbaijan Military Museum, the chair of war veterans and the social union of international militants, the participant of wars in Karabakh and Afghanistan, colonel Azizaga Ganizade, employees of the museum, BHOS management, lecturers, staff members and students. Prior to the event pictures and books containing information about the mentioned tragedy were displayed next to the meeting hall. The attendees honored the victims of Khojali tragedy with a silence minute. BHOS rector Elmar Gasimov underlined that Khojali tragedy turned to be one of the bloodiest ones in the history conducted by Armenian nationalists who were always pursuing the policy of ethnic cleansing and genocides against our nation. He stated that during the night between February 25 and 26 in 1992, Armenians backed by the former Soviet soldiers and officers leveled Khojali town to the earth, brutally annihilating civilians including children, women and old people. Elmar Gasimov said that after coming to the power the National leader Haydar Aliyev made great efforts to inform the countries of the globe, parliaments and international organizations about the truth of the above mentioned tragedy. Addressing the students BHOS rector said that they using their opportunities, foreign language competence should do their best to draw attention of the international community to the tragedy that took place in Khojaly 24 years ago. Mentioning that twenty one states of the USA had adopted the resolution of Khojali genocide BHOS rector emphasized the significance of writing note of thanks addressing to the governors of the mentioned states. Saying that Azerbaijan is strong enough he stressed our country’s capability to defend its position on the international level. BHOS rector expressed his confidence that owing to the efforts of our government the occupied Azerbaijani territories would be annexed to Azerbaijan again.

Colonel Azizaga Ganizade made a speech on ‘Khojali genocide is the crime against humanity’. He said that it was the bloodiest genocide committed against people in XX century emphasizing that it would stay on the pages of history as the cruelest act of terror. He particularly stressed that Khojali genocide was the part of the ethnic cleansing policy pursued by Armenia. Colonel Azizaga Ganizade added that everyone who committed this crime should be accused by the International Criminal Tribunal.

The participant of Karabakh war, colonel Intiqam Mirzayev called on students to be patriots and with the use of their English language competence to worthily represent Azerbaijan abroad truly informing global community thus commemorating the victims of the genocide. The meeting was concluded by the demonstration of the documentary movie ‘Snow of 1992’.