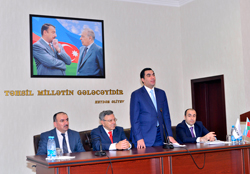 Opening the ceremony Rector Elmar Gasimov welcomed BHOS students and faculty and extended his congratulations to the students of the higher school, as well as to the Azerbaijani youth noting that youth care was one of the main directions of the state policy. Speaking about the importance of the Youth Policy launched by national leader Haydar Aliyev and continued successfully by President Ilham Aliyev, Mr.Gasimov mentioned that the government created every opportunity for comprehensive development of young people in Azerbaijan, while innovative reforms were still being implemented.

He also underlined the utmost importance of education both at national and international levels for facilitating the development of young people as intelligent and talented people adding that the State Programme for Education of Azerbaijani Youth Abroad approved by the Presidential Decree as of October 19, 2006, enabled talented Azerbaijani students to study at different well-recognized overseas universities. Mr. Gasimov also accorded on the Azerbaijani Youth Development Strategy for 2015-2015 approved by the Presidential Decree as of January 26, 2015, noting that all these programmes and policies were directed to ensure the development of young people who can feel great care by the government.

Briefing on BHOS activities and achievements made within the short period, Mr. Gasimov accented on the mission of the school which was training of highly qualified professional specialists with a good level of English and high standard qualification. He also mentioned that two BHOS students were sent to continue their studies at Heriot-Watt University stressing that every young person should do his/her best to make use of the available opportunities created to ensure the personal and professional development of the youth who formulated the basis of human resources in Azerbaijan. He noted that establishment of BHOS was a proof of the government's care for the youth. Speaking about the social life of students he expressed his strong belief for fostering professionalism in such sociable and open-minded students. Extending his congratulations to the students on the occasion of the Youth Day the Rector wished them success in their studies and social life.

Aida Soltanova and Kamran Aliyev currently studying at Herriot-Watt University also extended their congratulations to all BHOS students and Azerbaijani youth through a video conference.

The event continued with awards ceremony for active participation in BHOS social life, including various events, competitions, seminars and conferences. The BHOS management awarded the participants, teams and the winners of intellectual and interactive tournaments, the III Scientific and Technical Conference, the Chess Tournament, as well as a number of trainings, local contests and championships with diplomas, certificates and awards (sports awards - 21 students, science awards - 30 students, awards for active participation in social and organizational events - 241 students).