News
Baku Higher Oil School Students are among the winners 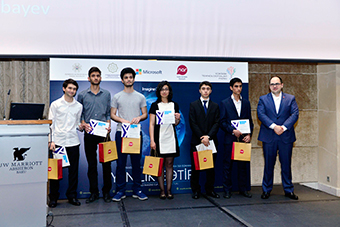 Taking part at the national finals of the large-scale international technological contest Microsoft Imagine Cup 2016, Baku Higher Oil School (BHOS) students joined the winners of the Cup jointly organized by Microsoft Azerbaijan and Nar Mobile with the support by Azerbaijan Ministry of Education, Ministry of Communications and High Technologies, and High Tech Park.

It should be noted that this year a total of 25 teams of university and college students were competing in 3 categories. In total 15 ones were qualified to the national finals after the success demonstrated during the national selection and online semifinals. Three winners in the Social Projects, Innovations and Games categories were qualified to the next stage where an online voting will be held. They have got a chance to compete for the award amounting to 50 000 USD awarded for project development.