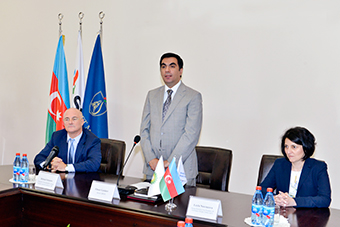 Mr. Helmut Schuster, BP Executive Vice President, Group Human Resources Director, visited Baku Higher Oil School (BHOS) being on a business trip in Baku. He met with BHOS management and students. In his welcome address, BHOS Rector Elmar Gasimov informed the guest about the higher school. He drew attention of the guest to the fact that established in compliance with the order of the President of Azerbaijan Republic Ilham Aliyev, BHOS became one of the leading higher educational institutions in the country.   Elmar Gasimov stressed that education and training of specialists was realized in line with petroleum engineering, chemical engineering and process automation engineering programmes. BHOS Rector said that the slogan ‘We should turn oil capital into human one’ had already been proved. Foundation of BHOS as one the most successful SOCAR projects envisaged education and training highly qualified specialists, who would be able to represent Azerbaijan in oversea countries, the ones who would be engaged in SOCAR’s international projects and future specialist working for such international company as BP. Touching upon close cooperation existing between BHOS and BP Rector underlined BHOS students’ internship being taken at the mentioned company. He made known that the knowledge offered by BHOS with the combination of science and practice would enable students to start the career path in national and international companies, being impetus for advancing in global market competition.

Mr. Helmut Schuster, BP Executive Vice President, Group Human Resources Director expressed his contentment in being at BHOS saying that the goal of his current visit was to make acquaintance with local BP team and activities connected with human resources in the region. He emphasized his gladness on visiting BHOS that offers high-level education. While pointing out the significance of human resources for every company and focusing on one of the projects oriented to the nationalization ‘BP specialists’ support for BHOS’, the guest expressed his confidence that cooperation between  BP AGT and BHOS as an integral part of commitment of BP to the government concerning nationalization strategy and local students’ engineering progress would be a great success.

Helmut Shuster completed his post-graduate diploma in international relations and his PhD in economics at the University of Vienna and then began his career working for Henkel in a marketing capacity. Since joining BP in 1989 he has held a number of leadership roles. He has worked in BP in the US, UK and continental Europe and within most parts of refining, marketing, trading, and gas and power. Helmut Schuster became group human resources (HR) director on 1 March 2011. Mr. Shuster’s current role involves leading the agenda for roughly 60,000 people across the globe and included businesses such as petrochemicals, fuels value chains, lubricants and functional experts across the group. He is also a non-executive director of BP Europa SE.