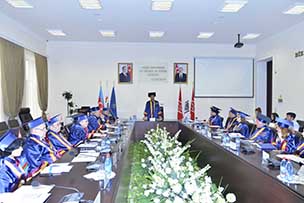 Baku Higher Oil School (BHOS) held a regular meeting of the Science Council. The Council meeting gathered the Chair and council members. Opening the meeting BHOS Rector and the Chair of the Council Elmar Gasimov touched upon the importance of the issues expected to be discussed during the meeting.

BHOS Rector heartily congratulated teams representing BHOS which ended the second during the Republican Contest on Informatics for the Students of Higher Schools and the winner of Famelab Contest BHOS student Mirlan Karimov. Elmar Gasimov thanked the students who contributed in popularization of the higher school on behalf of BHOS professors and lecturers.

BHOS Rector also talked about the outcomes of Academic year 2015/16. He also particularized on BHOS speedy development within short period, its successes and introduced innovations as well as BHOS new campus, which would be put into commission for Academic year 2016/17. Then Rector announced the issues included in the agenda. Broad discussions were held in this connection. After discussions, the voting was held on following issues: organization of summer internship, submission of documents connected with granting the title of Associate Professor to Mrs. Khanim Jafarova, lecturer of BHOS Petroleum Engineering Department to the Supreme Attestation Commission, inclusion of Training and Research Center on Renewable Energy Engineering into the structure of Lifelong Learning Department.

In conclusion, unanimous decision was made on the discussed issues, which were put to the vote.