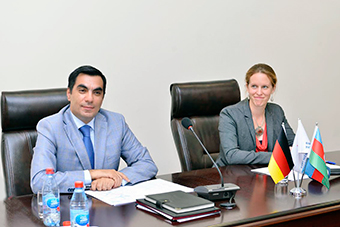 Opening ceremony of ‘Baku Summer Oil School’ was held at Baku Higher Oil School (BHOS). Thus, the project of BHOS to host summer school was accepted in order to be financed in the frames of ‘Go  East’, German Academic Exchange Service. The head of the project is Ms. Aytan Shadlinskaya, specialist of BHOS quality assurance department.

Opening the ceremony BHOS Rector Elmar Gasimov welcomed guests and briefed on the history and activities of the higher school. Touching upon achievements of BHOS, Rector also talked about the projects being realized there. He said he was pleased that BHOS was engaged with the project in question and participation of six students representing the leading universities of Germany in it. Elmar Gasimov wished project participants every success.

Office Manager of the Information Center of German Academic Exchange Service (DAAD) in Baku Ms. Stefanie Dufaux who attended the meeting congratulated the participants and said that it was the second time that the project in question was being realized on the part of BHOS. She said that owing to involvement in the project German students also had chance to familiarize with BHOS, one of the leading higher schools of Azerbaijan and Azerbaijan. Ms. Stefanie Dufaux said that Azerbaijan is distinguished with its hospitality. The head of the project Ms. Aytan Shadlinskaya briefed on the mentioned project and introduced the participants. Then BHOS four year students Fidan Salimzade and Leyla Pishyari made presentation specially prepared for the opening of ‘Baku Summer Oil School’.

It should be pointed out that six students representing leading German Universities and three Azerbaijani students will join ‘Baku Summer Oil School’ organized by BHOS  in the frames of ‘Go East’ programme of German Academic Exchange Service (DAAD). The project will be held between September 14 and September 24, 2016 at BHOS. In the frames of the project BHOS professors will conduct lectures for the said students on following topics: Energy Policy of Azerbaijan, Global Oil Policy, Innovations Applied in Petroleum Well Drilling, Renewable Energy Sources. Along with expanding academic knowledge, students will travel to Sheki to closely familiarize with Azerbaijan. They will also have the opportunity to visit Gobustan National Historical and Art Museum, Azerbaijan Carpet Museum, Azerbaijan National Art Museum and Haydar Aliyev mosque. With the purpose of familiarization with the oil history of Azerbaijan, the students will visit Sangachal oil terminal, mud volcanos, historical oil wells, oil museum etc. Students who successfully complete the programme will be awarded certificates on the part of BHOS.