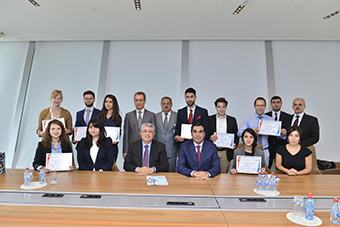 Upon successful completion of Baku Summer Oil School program organized by Baku Higher Oil School (BHOS), SOCAR Vice-President for HR, IT and regulations Khalik Mamedov and BHOS Rector Elmar Gasimov presented certificates to all participants of the program. Six out of eight participants are students from various prestigious universities in Germany.

SOCAR Vice-President for HR, IT and regulations Khalik Mamedov welcomed the guests and congratulated them on the successful completion of the program. He emphasized that the project was implemented at BHOS for the second time. He said that participation of еру German students in the program gave them a good opportunity to learn more about higher educational facilities in Azerbaijan, particularly about BHOS, and obtain a better knowledge of the country. Khalik Mamedov expressed his confidence that the guests would always remember Azerbaijan as a hospitable and friendly country.

Rector BHOS Elmar Gasimov express his satisfaction with the successful project implementation and participation of the students from six prestigious universities of Germany in the program.

During the visit to SOCAR, the quests were acquainted with the company new building.

The ‘Baku Summer Oil School’ project was implemented by BHOS in the frames of ‘Go East’ program of German Academic Exchange Service (DAAD). From September 14-24, BHOS professors and teachers conducted a series of lectures and training courses on various subjects for the school attendants. In addition, a two-day trip to Sheki and excursions in and outside Baku were arranged for the students to help them learn more about Azerbaijan. The program participants visited Museum of Gobustan National Historical-Artistic Reserve, Azerbaijan Carpet Museum, National Art Museum of Azerbaijan and attended Heydar Aliyev Mosque. To raise their awareness of the oil history in Azerbaijan, trips and tours to Sangachal Oil Terminal, historical oil wells, mud volcanoes and Oil Museum were also arranged.

The summer school hosted by BHOS was financed in the frames of ‘Go East’ program of the German Academic Exchange Service. Ms. Aytan Shadlinskaya, specialist of BHOS Quality Assurance department, was the head of the project.