News
"Your country is unique in many ways," say German participants of Baku Summer Oil School 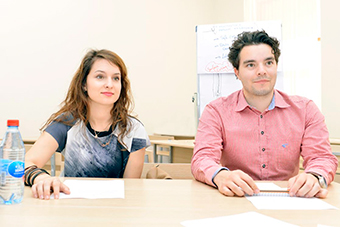 Baku Summer Oil School was conducted at the Baku Higher Oil School (BHOS) from 14-24 September 2016. We asked two German students involved in the program, namely Barbora Masarykova from Friedrich-Alexander University Erlangen-Nuremberg and Wӓchter Franz Maximilian from Technische Universität Darmstadt, to answer a few questions to learn more about their impressions of the participation in the Summer Oil School at BHOS.

Please tell why you chose Azerbaijan for your Summer Oil School and what your expectations were.

Barbora: As an MA student of Development Economics and International Studies, I am very interested in economic development of Latin American and Central Asian countries. I think that Azerbaijan has many things in common with these regions, although, as I understood later, your country is unique in many ways. I learned that many states, which were interested in Azerbaijan’s rich oil and gas resources, had a great impact on the political, economic, social and cultural development of the country during its centuries-long history. As a result, Azerbaijan has become a melting pot where many cultures are now mixed together.

Maximilian: I am studying Science of Engineering and I wanted to learn about different aspects of this discipline as much as possible. I know that Azerbaijan has highly developed oil and gas industry, and engineering plays a crucial role in oil and gas production; it is a foundation and a keystone for the construction of all oil and gas facilities. I was so keen to see the facilities in reality, because I have never seen them before in my life!

Before I came here, I read quite a few articles about oil and gas fields’ development in Azerbaijan. I was happy that I have managed to make my dreams true. It was fascinating to see not only modern facilities, but also very old rigs that are still pumping oil. At nights, I was looking at bright lights shining on the oil platforms far in the sea and was thinking of the power and complexity of those marine constructions. However, I have not seen any oil spills or other damage to the environment.

Are you satisfied with the program and your visit agenda? How did you feel in the role of BHOS students?

Barbora: Even though I am not specializing in the oil industry, I was very interested to learn about the sector development in Azerbaijan. It was a fascinating subject to study, primarily thanks to our teachers. The professors were real experts, we felt very welcomed, and I was pleasantly surprised by the professors’ openness to questions and discussions. This is very encouraging and I wish a lot of progress to the University.

We learned quite a bit about BHOS and we met the rector; we appreciate that he took his time for us. I was also very delighted to attend the ceremony for new students; it was new to me. We met with many BHOS students; they are very ambitious and smart. Their new campus looks great, and I feel that the management offer students high quality education. Moreover, I saw that the students do appreciate such an attitude and that they are in the best educational facility possible in Azerbaijan.

Maximilian: The study program was both many-sided and educational. Contrary to western universities, the way of teaching appeals to be more interactive. The tutors were really nice and open-minded. We also had a great opportunity to meet Azerbaijani students and see how talented and motivated they are.

As Barbora said, we were invited to a ceremony on the occasion of the new academic year, which was quite unusual for me. Mr. Gasimov personally congratulated students admitted to the Baku Higher Oil School, and I realized that there was a high competition among young people striving to become students of BHOS. In my opinion, Baku Higher Oil School is a very modern school and it distinguishes itself with modern technologies and equipment. I found myself in warm and welcoming atmosphere, which made our visit a pleasant stay.

However, speaking about our trip, I want to emphasize that it was important not only in terms of study. Our program coordinators created for us many opportunities to learn more about your country and your people. I very much liked the program and enjoyed the time I spend at BHOS and in Baku.

Would you please tell then about your impressions of Azerbaijan in general?

Barbora: We visited many beautiful places. I knew that Azerbaijan and its capital Baku are developing very quickly, but I did not expect to see such a wonderful mixture of modern skyscrapers and historical buildings in the city. I noticed that museums and other architectural structures were nicely reconstructed. Baku is rapidly developing and I was very impressed to see how clean it is. Before coming here, I was sure that Germany is the cleanest place in the world, but I have changed my mind!

Our trip to Sheki, one of the most ancient towns in the Caucasus, was fantastic. The Palace of Sheki khans is the very spectacular and it left a lasting impression on all of us. The nature is very beautiful, and the mountains are magnificent. And I have to admit that I already gained a couple of kilos, as Azerbaijani food was incredibly delicious. I particularly liked gutabs, which I tried for the very first time in my life. We also had Azerbaijani tea afterwards and I would never thought that someone could arrange a ceremonial tea party to have a cup of tea; it was unforgettable! It seems the tea culture is everywhere in Azerbaijan. I will always remember how we were drinking nice tea, eating all the delicious sweets like halva, discussing different topics and this all was surrounded by beautiful country.

Maximilian: I can only add that trips to Sheki, Gobustan and Ateshgah were something I could never even think of. I agree with Barbora and can confirm that Azerbaijani food is very tasty. Although I am a vegetarian, while meat is an important part of Azerbaijani cuisine, I have found that local bread, cheese, fruits and vegetables are almost irresistible, and tomatoes are superb.

Despite the abundance of various attractive places, I was looking for oil facilities wherever we went. On our way from and to Baku, we were passing Bibi-Heybat Mosque. It has a very nice design architecture, but what surprised me most was the view of a new platform for the Shah Deniz gas field being constructed not far from it. This is a vivid example of what Barbora said about Baku and its architecture. In Baku is the place where the new is in harmony with the old, where industrial giant can be located close to cultural monument and where studying may be as pleasant as entertainment. I very much hope to come back to see new developments made by Azerbaijan and its people.

What would you remember as a most vivid memory from your days in Azerbaijan? How would you describe your impression to your family and friends in two-three sentences?

Maximilian: The most vivid memory is the visit to the Fire Temple. The Temple made me understand why Azerbaijan is called the Land of the Fire and what it means. This is the place, which displays antique appearance that could remain throughout centuries and at the same time it connects history with modern Azerbaijan and its natural gas and oil.

Barbora: I am happy that I could step into the field of oil industry. I believe I could not choose a better summer school to be in - it went over my expectations. Personally, I found that the best thing in Azerbaijan is the people; they are very nice and very hospitable. I felt very welcomed since the first moment of my visit. From the bottom of my heart I wish Azerbaijani people all the best, as they are the real treasure of the country!