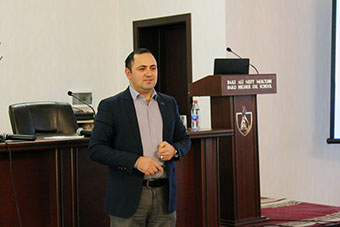 A project entitled Young Scientists and Quantum Physics is being implemented at BHOS with financial support from the Youth Foundation under the President of the Azerbaijan Republic. As the project manager, Head of the BHOS Student Affairs department and Chairperson of the Higher School Trade Union Committee Habiba Sadigli informed, during the project implementation, students participating in the project would learn more about fundamental science under the guidance of professional scientists. The following topics shall be discussed: What Quantum Physics is about; Scientific Approach to the Creation of the World and Big Bang; God Particle: Higgs Boson; and The Large Hadron Collider. The initial research and study will be followed by group discussions. These activities would help the students to improve management and leadership skills, learn how work with others and to exchange information.

Within the project implementation, a Poster Contest will be organized. During the contest, competing teams will highlight about given scientific problems and ways to address them, and the team leaders will make presentations. The project, which started on November 27, will be conducted every Sunday for five weeks at the BHOS premises. At the end of the project, the students shall receive certificates of participation. The teams, which successfully complete the project, will be awarded with diplomas and trophies.