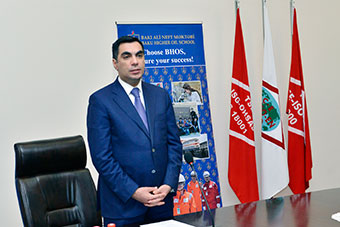 An awarding ceremony dedicated to completion of the Quantum Physics Presented by Young Scientists was held at Baku Higher Oil School (BHOS). The project was implemented with financial support from Youth Foundation under the President of the Azerbaijan Republic. BHOS Rector Elmar Gasimov, Vice-Rector for General Affairs Rashad Hasanov, Professor Siyavush Azakov, and young scientists Sakin Jabbarov, Yusif Aliyev, Sevda Rzayeva and Mirlan Karimov, who were the project trainers, attended the event as honorable guests.

Speaking at the ceremony, BHOS Rector Elmar Gasimov told about a number of projects implemented by students and staff members of the Higher School with financial support from the Youth Foundation under the President of the Azerbaijan Republic. Rector Elmar Gasimov highly praised the Foundation activity and expressed his gratitude to the organization’s management for their support of various youth initiatives and projects. He emphasized that such support is conducive to the successful implementation of the State Youth Policy in Azerbaijan. Rector Elmar Gasimov informed that in 2016, eight projects of students and staff members of BHOS became winners of the VIII Contest for Grants by the Youth Foundation. He emphasized that all of them were carried out with support from the Higher School.

The Quantum Physics Presented by Young Scientists Project manager, Head of the BHOS Student Affairs department and Chairperson of the Higher School Trade Union Committee Habiba Sadigli provided information about the project. She said that the project started on November 27 last year. Within five weeks of the project implementation, trainings and other activities were conducted by young scientists every Sunday at the BHOS premises. The project Organizing Committee was comprised of the Higher School students.

BHOS Professor Siyavush Azakov and project trainers Sakin Jabbarov, Yusif Aliyev, Sevda Rzayeva and Mirlan Karimov emphasized that the project was very well organized and attracted interest of its participants. They also expressed their confidence that similar projects would carried out in the future.

At the end of the ceremony, the project participants were awarded with certificates and presents.