About BHOS
Governance and Administration
Administrative Departments
About Baku

Baku, the capital of the Republic of Azerbaijan, is one of the biggest industrial, scientific and cultural centres not only of Azerbaijan, but also the region. Baku is divided into 11 administrative regions. 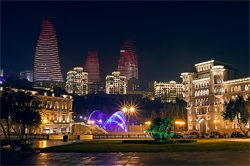 If we look back to the history of the city, we can see that Baku was the first harbour on the Caspian Sea. Taking into account the fact that Azerbaijan is located on the cross line of Europe and Asia, then Absheron peninsula where Baku is located becomes the region which is one of the important geographical bridges for the Europeans trying to study the Asian and Far Eastern nations. Oil production played a significant role in the history of the city. Petrol loaded Camel caravans used to travel through the Silk Way to Europe and Asia.

During the Great Patriotic War in 1941-1945, Baku was the main strategic fuel supplying hub for the Soviet aviation and armoured vehicles, which was one of the factors for the USSR’s victory.

During 1970s, Haydar Aliyev, who then used to serve as the First Secretary of the Azerbaijan SSR Central Committee, had a significant contribution to the formation of the modern style of the city and gave a number of orders to Alish Lambaranski, the Major, regarding architectural modernization and development of Baku while maintaining its historical design style. He also had specific instructions to support construction of various picturesque monuments, cultural structures, parks, squares and some other public buildings facilitating architectural and cultural development of the city.

When Azerbaijan got its independence from the Soviet Union in 1991, as well when Haydar Aliyev returned back to hold his political position in 1993, political unification, and economic and social development period began.

Today, Baku is the scientific, technical, industrial, economic, social and cultural Center of the South Caucasus region. In Baku, the first National Theatre was established in 1873, and Leyli and Madjnun, the first opera in the oriental Islamic states, was performed in 1908. The first national university and library were also established in Baku.