Results of the Young Researcher of the Year contest are summarized at Baku Oil Higher School (BHOS). It was conducted among BHOS students. Under the contest conditions, each faculty presented three research papers prepared by their students in the last year and a half. The works were evaluated by a jury assigned by BHOS Rector’s decree and comprised of nine members including three senior students.

Three papers were selected for the final stage of the contest and assessed by a commission consisting of five experts also assigned by BHOS Rector. Authors of the selected research papers made presentations and answered the commission members’ questions. Based on the results of evaluation of every research paper and presentation, fifth-year Chemical Engineering student Nijat Gasimov (his research advisor was associate professor Amir Vakhshoury) was announced the winner of the contest and Young Researcher of the Year for his work entitled Green Nanotechnology-based Water Purging. Fourth-year Process Automation Engineering student Leyli Abbasova (her research advisor was associate professor Nailya Allakhverdiyeva) was second. She submitted a research paper entitled Designing Neural Networks based on MATLAB. Fifth-year Chemical Engineering student Kamran Aliyev (his research advisor was senior lecturer Sanan Eminov) with a paper The Caspian Sea Waves’ Energy Potential finished up in third place.

As the winner of the Young Researcher of the Year contest Nijat Gasimov received an award certificate and a special prize. In addition, he presented his research paper at a scientific conference held alongside a literature and art evening in the framework of the II Azerbaijan Science Festival at BHOS. 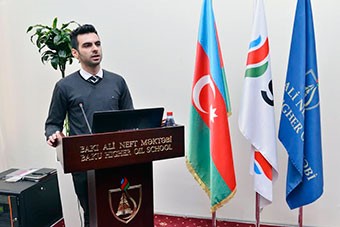