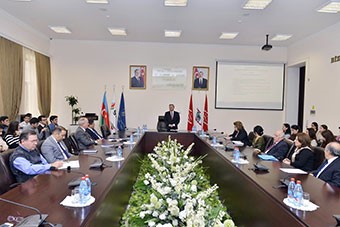 Round table entitled 16 November is International Tolerance Day was held at Baku Higher Oil School. Welcoming the round table participants, BHOS Vice-Rector for Training, Science and International Relations Ramiz Humbatov reminded that upon Decree by the President of the Azerbaijan Republic Ilham Aliyev, 2016 is announced a Year of Multiculturalism in Azerbaijan. He noted that Azerbaijan as a country of tolerance conducting a corresponding policy in this field can set a pattern for other countries.

Foreign students of BHOS shared their thoughts and impressions about Azerbaijan. Indian citizen Entony-Mario Suares and Georgian citizen Amayil Mamedova said that they very much liked the atmosphere of tolerance in the country as well as the kindness and hospitality of the Azerbaijani people. They also told that they would like to build their professional career in Azerbaijan.