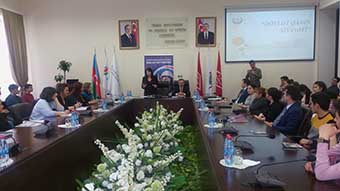 A meeting to present Article Contest entitled “Women are pillars of our state, independence, our present time and our future” was held for students at Baku Higher Oil School (BHOS). The contest, which is organized by The State Committee for Family, Women and Children’s Affairs of the Azerbaijan Republic, is dedicated 94th anniversary of the birth of the Azerbaijani national leader Heydar Aliyev. The meeting gathered BHOS Vice-rector for Training, Education and International Relations Ramiz Humbatov; member of the Board of the Women’s Council of the New Azerbaijan Party (YAP) Zarifa Guliyeva; Head of Information and Analytical Research of the State Committee for Family, Women and Children’s Affairs Elgun Safarov; Chairperson of the Women’s Council of Khatai district branch of YAP Augun Akmedli, and teaching academic staff of the Higher School.

Opening the meeting, Vice-rector Ramiz Humbatov said that women’s role in the political, social, economic, scientific and cultural spheres of Azerbaijan significantly strengthened due to support and efforts by the national leader Heydar Aliyev. He also emphasized that their contribution to the prosperity and development of the country are appreciated and acknowledged by the state leadership.

Member of the Board of the Women’s Council of YAP Zarifa Guliyeva said that the contest aims to develop creative potential of talented youth and added that statements and observations of the great national leader Heydar Aliyev should be underlying principles of the works to be submitted. Head of Information and Analytical Research of the State Committee for Family, Women and Children’s Affairs Elgun Safarov told about objectives of the Article Contest and spoke about initiatives and efforts of the Azerbaijani government aiming at addressing women’s problems and protecting their interests. He announced that all those willing to participate in the contest should send their articles and contact information (including name, surname, patronymic name, phone numbers and place of study or work) to the meqale-musabiqesi@inbox.ru.

The Chairperson of the Women’s Council of Khatai district branch of YAP Augun Akmedli spoke about active participation of Azerbaijani women in the country life. As she said, First Vice-President of Azerbaijan Mehriban Aliyeva provides an outstanding example not only for Azerbaijani women, but also for all women of the entire world.

At the end of the meeting, the guests answered numerous questions from students.