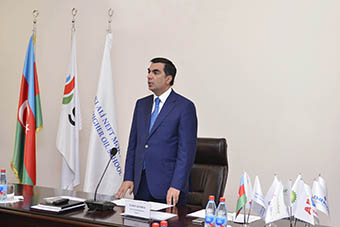 Addressing the attendees, BHOS Rector Elmar Gasimov expressed his gratitude to the Organizational Committee for arrangements made to conduct the conference successfully. He also thanked the Higher School professors and lecturers, conference participants and representatives of international companies who took an interest in the Higher School students’ scientific and research activities. Speaking about important role of science and education in society, the Rector informed the audience about BHOS activities aimed at raising young people interest in scientific and research work and told about the Higher School teachers’ contribution to education of the young generation. Elmar Gasimov also wished the students every success and new achievements in the future.

Representatives of companies presenting at the conference thanked BHOS management for organizing the conference. The speakers highly praised the Higher School contribution to Azerbaijani science and education as well as their cooperation with the Higher School aimed at training of highly qualified national specialists for oil and gas sector.

Representatives of SOCAR and international companies operating in Azerbaijan thanked BHOS management for successful organization of the conference and for the Higher School’s contribution to development of Azerbaijani science and education. The speakers highly praised BHOS activities aimed at training of highly qualified national specialists and spoke positively about their cooperation with the Higher School in this field.

Then Rector Elmar Gasimov awarded the students, whose reports were recognized as best among presented at the conference. They received diplomas of various degrees from BHOS and valuable gifts from SOCAR, BP, Statoil, Total, Emerson Process Management, ABB, Avandsis Group, Halliburton and Confidence Capital.