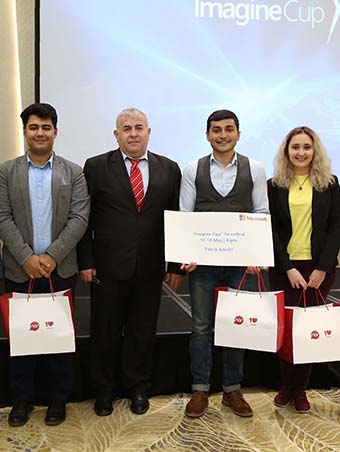 Team of Baku Higher Oil School (BHOS) entitled “Oilman” is participating in the regional finals of Microsoft Imagine Cup 2017, which is held from May 17 to May 19 in Kiev, Ukraine. The Imagine Cup 2017 Worldwide Finals will take place in July 2017 in Seattle, USA, where teams from many countries will contend for the main prize in an amount of US$100,000 to be awarded for successful implementation of the winning project.

The Imagine Cup is a large-scale international annual student technology competition. All competitors create projects that address the Imagine Cup theme: “Imagine a world where technology helps solve the toughest problems.” Under the terms of the competition, the applicants wishing to participate in Microsoft Imagine Cup 2017 had to develop and implement an innovative Microsoft platform-based software project, develop a Microsoft technology-based prototype application aimed at solving complex problems of the modern time, or to create an original game based on any of Microsoft Windows gaming platforms.

The BHOS team developed an application called Jabda on the basis of Windows Azure, which is a cloud computing service. As one of the team members, the Higher School’s fourth-year Process Automation Engineering student Shamil Omarov comments, this software can be used for multiple purposes in various fields. In his words, with the help of this application, users can choose their favorite music in restaurants, cafes, shopping centers and other public places. “Users of the Jabda system can upload a special application in the places where the system is installed and then upload their favorite songs and melodies from their mobile phones to the existing collection. Moreover, these people will be able to vote for one or another track to move it up in the playlist,” said Shamil Omarov.

The Azerbaijani team also includes two more BHOS students, namely fourth-year Process Automation Engineering student Kerim Kerimov and fourth-year Petroleum Engineering student Lala Mamedova. Early in May, the team took the first place in the Azerbaijani national finals of Microsoft Imagine Cup 2017 and, as the winner, came through to the competition next stage, which is taking place in Kiev.