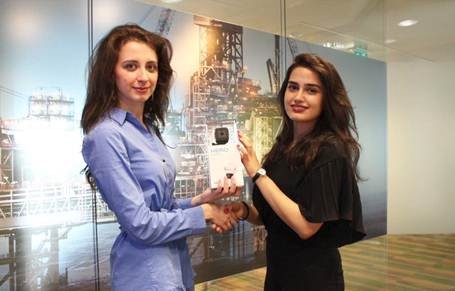 Aydan Asadova, a student of Baku Higher Oil School (BHOS), has won an international contest conducted by BP among participants of the company internship program around the world. During the contest, the students shared their impressions about BP and experience they gained, memories about people they met and worked with, and photos telling about their participation in the program at various BP facilities. As a winner of the contest, Aydan Asadova was awarded by BP with a GoPro action camera. Aydan’s success story as well as the story told by herself are published on BP official website and on the company’s page on Facebook.

Earlier this year, she became one of the winners of Techno Fest 2017 student projects’ presentation contest conducted by BP-Azerbaijan for interns undertaking summer internship at the company and received a certificate on successful participation in the contest. Aydan Asadova is a fifth-year Process Automation Engineering student of Baku Higher Oil School.