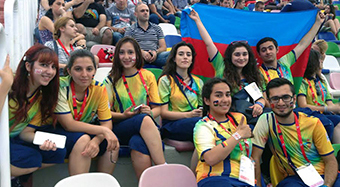 BHOS 2nd year student of Chemical Engineering Bagchagul İmanova volunteered at European Youth Olympic Festival hosted by Tbilisi, Georgia during 26 July – 1August, who has previously attended to Baku 2015 first European Games as a volunteer as well. Bagchagul Imanova was invited to Tbilisi 2015-European Youth Olympic Festival because of her distinguished volunteership and gained experience during Baku 2015 first European Games. As the festival was over she was awarded with the certificate by the Operations Committee of the festival.

Total number of 30 Azerbaijani students volunteered during the mentioned festival.