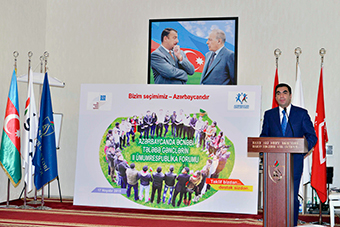 Welcoming the attendees Ayseba Umutlu, the Chairperson of Baku International Students Club spoke about the remarkable projects that had been realized since 2011 when the first forum was held and appreciated the support rendered by BHOS management to organization of the forum. “The forum mainly aims at bringing together foreign students studying in Azerbaijan, giving them the opportunity to express themselves. It also aims at studying the challenges faced by foreign students during the project implementation and their interests, as well as organization of events which would help to strengthen communication between Azerbaijani and foreign students. Today, about five thousand students representing 58 countries study in Azerbaijan. While the number of participants of the First Forum constituted about 200 students from 18 countries, today we are hosting over 300 students from 25 countries”, Ms. Umutlu said.

“Stressing that Azerbaijan always contributed in educating international level specialists Mr. Gasimov spoke about outstanding activities in this direction initiated in the 1970s by the National Leader Haydar Aliyev. BHOS Rector mentioned that some persons who used to study in Azerbaijan later on occupied high positions in their countries. He also drew attention of the participants to the fact that this policy was successfully pursued now by the President of Azerbaijan Republic Ilham Aliyev. “Azerbaijan turned to be the second home country for foreign students” Elmar Gasimov said.

Deputy Minister of Youth and Sports Intigam Babayev thanked the Forum organizers and highly appreciated BHOS Rector’s support to convening this meeting. He recommended foreign students to share their knowledge about the history and culture of Azerbaijan gained during their studies here once they return to their home countries. I. Babayev wished every success to the Forum participants.

Vusal Guliyev, the Head of Youth Sector of Social and Political Department at the Presidential Administration also extended his best wishes to the Forum participants hoping this kind of meetings would be organized in future systematically.

The participants of the Forum with the motto “We propose, you support” generally focused on the necessity of creation of the International Youth Centers, availability of more dormitories for foreign students, the possibility of short-term jobs, organization of exhibitions for creative and talented students and special tours in order to more closely familiarize foreign students with Azerbaijan. The Forum continued with students performances on Azerbaijani national songs and dances.