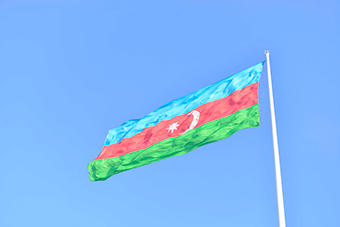 Students of Baku Higher Oil School visited the National Flag Museum. This visit was organized in frames of the series of visits to familiarize students with cultural and historical heritage of Azerbaijan. Students became acquainted with the exhibits showing the history of the statehood of Azerbaijan, its traditions and state symbols. The restored flags of states once existing on the territory of Azerbaijan as well as the flag of Irevan khanate were also exhibited in the Museum.

The students were demonstrated flag elements of the XVII-XVIII centuries, coat of arms, the booklets of the Constitution of Azerbaijan which was adopted at different periods of time, post stamps, orders and medals, numerous photos depicting the period of formation and development of independent Azerbaijan during the Presidency of the National Leader Haydar Aliyev, as well as the photos showing the activities carried out under the leadership of the President of Azerbaijan Republic Ilham Aliyev directed to prosperity of our country. Students also had a chance to see the flags used during the inauguration ceremonies of the late President Haydar Aliyev and President Ilham Aliyev, the flag of the Supreme Commander-in-Chief of the Military Forces, and the flags and uniforms of the national military troops. Also, the students were introduced detailed information about the history of the museum as well as the exhibits.

It is worth mentioning that such visits are organized to facilitate awareness raising among students and increase their world view.