News
BHOS Student won I Have Got an Idea! contest 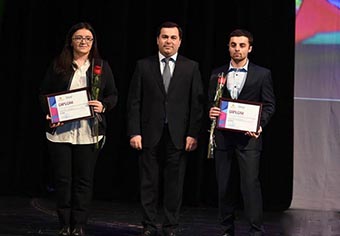 Third-year Process Automation Engineering student of Baku Higher Oil School (BHOS) Aydin Nasirzade became one of the winners of the First Nationwide Scientific and Creative Youth Contest conducted under the title “I Have Got an Idea!” His project entitled “I am a Soldier!” took third place in the nomination of Patriotic and Civic Education, and Protection of National Moral Values. His fellow students Adil Rashidli and Eltun Ibrahimov helped Aydin to implement the project.

The two-month contest arranged by the Ministry of Youth and Sports of the Azerbaijan Republic was aimed to promote young generation’s social initiatives, scientific and creative activities, help young people to fulfil their potential as innovators, and raise their interest to scientific and research work. Young people aged from 14 up to 29 years old participated in the contest with either individual or group projects. In total, 273 projects were submitted in the following nominations: Patriotic and Civic Education, and Protection of National Moral Values; Social Life; Informal Education and Innovative Activity; and Environment and Healthy Lifestyle. The amount of the contest prize fund made up four thousand manat. Those authors who took first places in any nomination were awarded with 500 manat each, and those taking second and third places received 300 manat and 200 manat respectively.