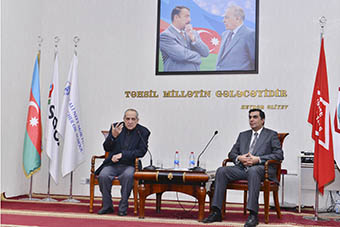 Famous Azerbaijani cinema and theatrical actor, People’s Artist of Azerbaijan, holder of the Shohrat Order (Order of Glory) and Presidential Stipendiary Rasim Balayev visited Baku Higher Oil School (BHOS) and met with BHOS students and academic teaching staff. Prior to the meeting, segments of movies with the eminent actor were shown.

Opening the meeting, the Higher School’s Rector Elmar Gasimov expressed his sincere gratitude to Rasim Balayev for coming, and spoke about life and work of the celebrated cinema and theatrical actor. “Films with this legendary Azerbaijani actor have written a new page in the history of the national cinema art. In his roles, he created unique characters of true patriots, brave men and fearless fighters,” said Elmar Gasimov. Having emphasized that Azerbijani state has always provided support to people of art, the rector reminded that Rasim Balayev was only 28 years old, when the national leader Heydar Aliyev awarded him with the title of Honored Artist of the Azerbaijan Republic, and that the actor became People’s Artist of Azerbaijan at the age of 34. He said that the national leader Heydar Aliyev awarded Rasim Balayev with the Shohrat Order, and the President of the Azerbaijan Republic Ilham Aliyev awarded him with the Presidential Stipend.

In his speech, the eminent film and theatre actor thanked BHOS management for arranging the meet-the-artist session. In his words, he is very pleased to meet with the undergraduates of the Higher School, which is known for admitting prospective students receiving the highest score at the entrance exams. Rasim Balayev told about his youth, studentship, professional life, and funny and memorable cases during shooting films. Speaking about milestones in development of Azerbaijani film and theatrical arts, and his own experience in acting, Rasim Balayev noted that even large-screen color television would never substitute the silver screen and cinema theatre. He said, “A person sitting in front of a TV set with a remote controller can never be compared with a person going with family and friends to movie theatre. These people represent different audience and will have different experience.”

Rasim Balayev emphasized, “Cinema art is educationally valuable, as it aims to develop sense of beauty in people and make them kinder and better.” Speaking about acting profession, he told that he had not have the final word yet and added, “I believe that my best role is still ahead in the future!”

Upon the students’ request, the famous actor recited a poem entitled “Yenə o bağ olaydı” (I wish it were that garden again) written by Mikayil Mushfig; then BHOS second-year Chemical Engineering student Nazperi Isfandiyarzadeh read one of the ghazals written by greatest poet Nasimi. Having praised the student for her talent and performance, Rasim Balayev wished all undergraduates of the Higher School every success. Then he answered numerous questions.

At the end of the meeting, BHOS rector Elmar Gasimov expressed his deep gratitude to the famous artist for the interesting, useful and informative talk and presented Rasim Balayev BHOS Honorable Guest diploma.