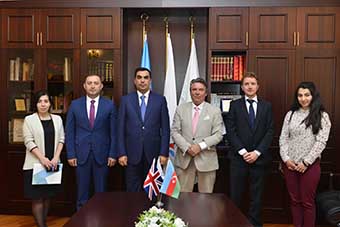 The Rector Elmar Gasimov welcomed the guests and provided them with detailed information about BHOS activities and achievements. As he informed, the higher educational institution was established to prepare high-qualified English speaking engineers in accordance with international educational standards. These specialists can work at facilities of transnational oil companies including SOCAR both in Azerbaijan and in other countries around the world. To achieve this goal, the Higher School has established and developed long-term close partnership with large oil and gas companies operating in Azerbaijan.

Speaking about Atkins company activities, the General Manager of Atkins representation office in Azerbaijan James Todd said that the company provides engineering, design, planning, architectural design, project management and consulting services worldwide in many sectors including oil and gas industry, industrial engineering and construction, urban development, renewable energy and geotechnical prospecting. Currently, Atkins operates in Azerbaijan upon a contract with BP and participates in implementation of the policy of nationalization of personnel. Within this initiative, the company intends to establish close partnership relations with the Baku Higher Oil School and offer various opportunities to BHOS students including summer schools, internships, workshops, on-the-job training and other courses to be conducted by the company specialists.

Head of Trade and Investments Department of the UK Embassy in Baku Steve Smith also expressed interest in developing partner relationship between the Embassy and BHOS. In his words, he is encouraged by the successful cooperation of the Higher School with Heriot-Watt University and BP in Azerbaijan. Steve Smith said that the British Embassy would provide all necessary support and assistance to help BHOS build ties with other British universities and companies.

At the meeting, the participants arrived at a consensus to conclude a cooperation agreement between the Baku Higher Oil School and Atkins company.