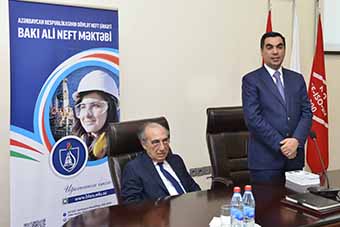 Greeting the participants, the Rector Elmar Gasimov extended his congratulations to Fuad Veliyev and wished every success in the future. He emphasized that Fuad Valiyev is a true citizen of his country who cares about history, culture and moral values of the Azerbaijani people. Speaking about the professor’s writing, Elmar Gasimov said, “Fuad muallim is an excellent example of modern scientist and teacher, who is not only capable to teach his students engineering subjects, but also can equip them with knowledge in arts and literature.”

Then the workshop participants discussed a film, which was shown as visual presentation of the Requiem Poem. They spoke about importance and value of Fuad Veliyev’s book and said that the author managed to touch upon the most serious challenges facing the modern world. The poem, they emphasized, reflects the professor’s thoughts about good and evil, history and its lessons, and everyone’s responsibility for the future. Sharing their opinions, the speakers paid tribute not only to the active social positioning of Fuad Veliyev, but also to his poetic talent. In their view, the film presenting the book is a sincere and unique artistic appeal of the author to his contemporaries, especially to young generation.

Talking about many-year teaching, research and creative activities carried out by Fuad Veliyev, the workshop attendants said that he set a good example for his students. The speakers expressed their gratitude to the professor and BHOS management for arranging such an interesting the event.

The Synergy Scientific Discussions Club’s activities aims at informing students, teachers, young scientists, and specialists on new achievements, challenges and perspectives in various sciences, encouraging them in scientific and research work and helping them to improve their discussion and presentation skills. At the Club workshops, local and foreign experts deliver lectures; round table discussions and students’ presentation are also arranged. The Higher School teachers and students as well as all interested people are welcome to attend the workshops.