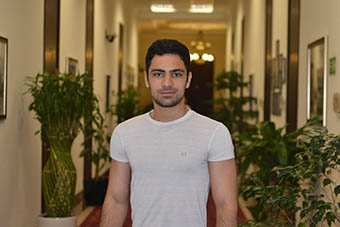 Graduate of Baku Higher Oil School (BHOS) Riyad Muradov, who received a Bachelor degree in Petroleum Engineering, obtained a scholarship from Stanford University in the USA, the second most prestigious university in the world, and will pursue a Master’s degree there.

– Please tell about yourself.

– I was born in Baku in 1995. In 2001, I went to the first class of the school №47 of Narimanov district of Baku. In 2009, I entered lyceum named after Zarifa Aliyeva. In 2012, I graduated from the lyceum and participated in the entrance exams to universities. Having earned 645 points, I entered Baku Higher Oil School to study Petroleum Engineering. In 2012-2014, I worked for “AzDimension” company on commission of the Ministry of Youth and Sports. “AzDimension” is game developer studio that specializes on 3D computer games and applications. In 2013, I was awarded SOCAR’s certificate upon successful completion of training at the Training Center on Safety of Life at Sea of the SOCAR’s Education, Training and Certification Department. During my studying, I undertook two-week internships at the 28 May Oil and Gas Production Department and at BP-Azerbaijan company in 2014 and 2015 respectively. Since 2016, I am a board member of the Student Chapter of the Society of Petroleum Engineers (SPE) at the Baku Higher Oil School.

– What goals did you set yourself after you became BHOS student? Have they turned into reality?

– I learned about opening of the Baku Higher Oil School while I was preparing for my entrance exams. I became very curious about this new higher educational institution, which trains engineers for oil and gas industry. I decided to take the risk and selected BHOS. After five years of study, I can confidently say that I made the right choice. As for my goals… I wanted to obtain a profession in the field of computer technologies, and I did it. I also wanted to become Master Student at a leading international university, and now I am!

– What someone needs to do to be admitted as Master Student at such a prestigious university?

– To achieve such a goal, you need to study hard, read a lot and work on yourself all the time. It is also necessary to be persistent in your intentions and know how to achieve your goals. I can tell you how I became a Master student at Stanford University. At the beginning, I passed IELTS tests, and then I took GRE and GPA exams. After that, I prepared a research project, which I sent to a number of universities in the USA. Three universities, namely the   University of Texas at Austin, Colorado School of Mines and Stanford University, were ready to accept my application, and without thinking, I chose the latter.

– Why have you selected Stanford? What do you know about the university? What are your expectations?

– Stanford University is one of the most well-known and prestigious study and research centers in the world. Founders of the largest corporations, such as Hewlett-Packard, Electronic Arts, Nvidia, Yahoo! и Google, graduated from this university, to name a few. And Stanford provides fantastic opportunities for research activities. Suffice to say that one of NASA research facility is located here. But most importantly, the University’s Computer Science Department is one of the best in the country, as it is a training center of specialists for the Silicon Valley.

– How did study at BHOS prepare you for Stanford?

– Of course, theoretical and practical knowledge, which I gained at the Higher School, helped me a lot. Moreover, I significantly improved by English language during my study at BHOS, and excellent knowledge of the language was a great part of my success. I am very grateful to the Rector Elmar Gasimov and all my teachers as well as to the leader of SPE’s Young Talents Program Elshan Rzayev, who helped me to believe in myself.