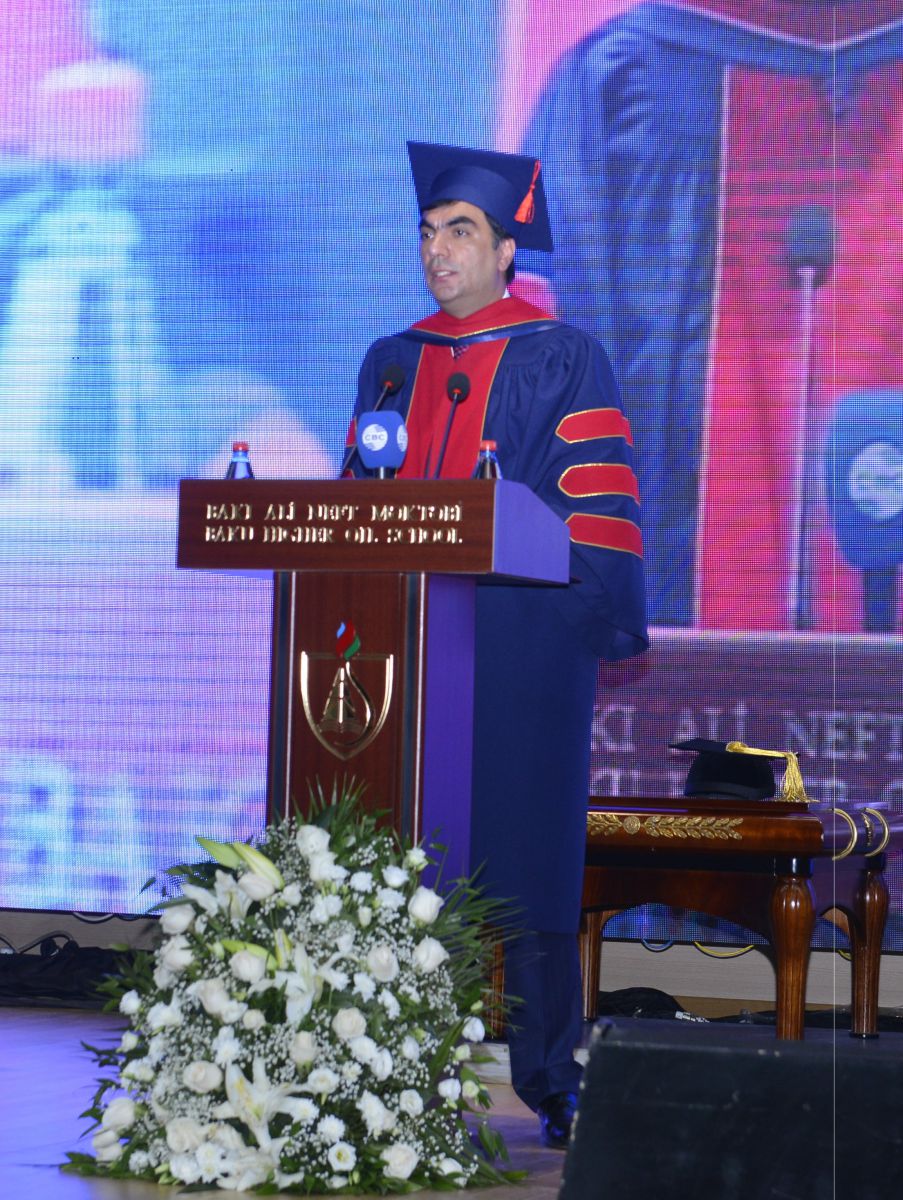 At the beginning, a video presentation on opening ceremony of the Higher School new campus on May 1st, 2017, with participation of President of the Azerbaijan Republic Ilham Aliyev was shown. Opening the graduation ceremony, the Rector Elmar Gasimov welcomed the guests, expressed his sincere congratulations to the graduates and wished them every success in the future. He emphasized that due to the Azerbaijani President Ilham Aliyev attention to the issues of young generation, all necessary conditions were created for youth’s development in all spheres including opportunities for their education at national higher educational institutions.

“It is a great pleasure and honor for us to see BHOS graduates, the most intelligent young people in Azerbaijan, who managed to gain highest scores at entrance exams and become our students,” he said. Speaking about the Higher School graduates’ successes, the rector informed that a number of them were awarded with scholarship and admitted to the most prestigious universities of the world, while others were selected for jobs at well-recognized international companies including BP, STAR Refinery and SOCAR Turkey.

Having congratulated the newly qualified engineers, SOCAR President Rovnag Abdullayev wished them to follow traditions of the Higher School, which is recognized as a national brand of the education in Azerbaijan, and to become excellent professionals of the oil and gas sector. “We successfully implement the strategy of the President of Azerbaijan Ilham Aliyev aimed at transferring oil capital into human capital. And you, young specialists, are the builders of the future of the country, who can make a solid contribution towards its development and prosperity,” told Rovnag Abdullayev.

Speaking about BHOS achievements in developing international cooperation, BP Regional President for Azerbaijan, Georgia and Turkey Gary Jones emphasized that the Higher School achievements in this sphere would help BHOS to be become one of the most internationally recognized universities.

Deputy Minister of Education of the Azerbaijan Republic Firudin Gurbanov also expressed his congratulations to BHOS graduates on the remarkable day in their life and spoke about successes achieved by the Higher School in training of Azerbaijani specialists with good knowledge of English language for oil and gas industry. He expressed his confidence that the representatives of new generation of Azerbaijani engineers would make a valuable contribution towards further economic development of the country and would honorably serve the interests of Azerbaijani state.

Dean of Engineering of Heriot-Watt University Dr. Peter Kew also extended his sincere congratulations to the graduates and wished them to attain great achievements in the future. I have no doubts that BHOS graduates will be the best Azerbaijani engineers wherever they work, he said.

Then a ceremonial presentation of the diplomas started. One hundred and two young petroleum and chemical engineers received diplomas of BHOS and HWU. The dual diploma program is being implemented according to an agreement between the British university and the Higher School, whose academic programs are developed on the basis of the Heriot-Watt University’s syllabi. Graduate of Petroleum Engineering department Ibrahim Mamedov and graduate of Chemical Engineering department Akhmed Gelenderli, who graduated with honors, were presented with plaquettes. In addition, Ibrahim’s name badge was placed on a symbolic tree stump.

On behalf of all graduates, Fahmin Husuzadeh and Fidan Selimzadeh expressed their deep appreciation to the Higher School’s professors and teachers and thanked everyone who helped them to become true professionals and good specialists. Speaking on behalf of the graduates’ parents, Faig Aliyev, father of Kamran Aliyev, who graduated from Chemical Engineering department, extended his gratitude to BHOS management and teachers for their efforts and contribution towards education and training of young engineers.

Representatives of the Caledonian Society of Baku and Azerbaijani famous musical band “Natiq ritm qrupu” performed during an artistic part of the event. At the end of the ceremony, the graduates threw graduation caps as per a centuries-long tradition, and commemorative photos were taken.