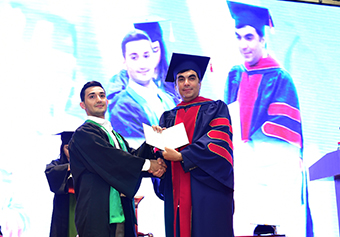 Graduate of Baku Higher Oil School (BHOS) Kamran Aliyev who received a Bachelor degree in Chemical Engineering has obtained a scholarship from Friedrich-Alexander University Erlangen-Nürnberg (FAU) in Germany and will do a Master degree there.

– Please tell about yourself.

– I became a student of the Baku Higher Oil School in 2012, after I earned 637 points at the entrance exams in the first group of specialties. And this year I received my Bachelor degree and became one of the very first BHOS graduates!

I was born in Baku in 1995. In 2001, I started my primary education at the school №5 of Nasimi district of the capital. In 2009, I was transferred to Technical and Humanitarian Lyceum №2 named after Habibbek Mahmudbekov of Sabayil district in Baku and graduated from the lyceum in 2012. From 2004-2009, I studied at a musical school №26 named after Muslim Maghomayev and played chess; I participated in chess competitions and received second and third degrees diplomas. After graduating from the school, I entered BHOS to study Chemical Engineering, as I said earlier.

In 2013-2015, I took summer internship at oil refinery plant named after Heydar Aliyev and at Halliburton Eurasia Ltd. In 2014, I was awarded a third-degree diploma for successful presentation at the second Scientific and Technical Student Conference dedicated to 91st anniversary of the national leader Heydar Aliyev. While a third-year student, I was selected for study during one term at Edinburgh Campus of the Heriot-Watt University in the UK because of my excellent results at BHOS. In January 2016, I attended a short-term training on International Trade Operations and Procedures. In July 2016, I took summer internship at Ethylene-Polyethylene Plant of “Azərikimya” Production Union, and in August that year, I did on-the-job training at petrochemical facility of Petkim Petrokimya Holding A.Ş in Turkey. During the internship, I participated and took the first place in a competition entitled "Evaluation of the best innovations and ideas in production". After the internship completion, I received Certificate of Appreciation as the winner.

– What goals did you set for yourself after you became BHOS student? Have they turned into reality?

– When I became a BHOS student, I set up a number of goals for myself. I can mention some of them. I wanted to successfully finish my studies at the Higher School, be an active student, participate in various events and initiatives, take full advantage of the opportunities offered by Baku Higher Oil School, and, finally, become a member of the BHOS family. I believe that I managed to achieve my goals.

– What someone needs to do to become a Master Student at one of the most famous universities?

– To be admitted to a prestigious university, you need to make a number of steps. You need to receive education, which meets international standards, and to earn high score for the admission. It is also important both to demonstrate your knowledge and to be able to use them to offer and develop new ideas. And, of course, commitment and motivation are keys for the success.

– Why have you selected this university? What do you know about FAU? What are your expectations?

– Friedrich-Alexander University Erlangen-Nürnberg is among five best universities in Germany in the field of chemistry, and it is considered one of the most innovative higher educational institutions. Moreover, Engineering Faculty of FAU is well known scientific and research center, and it is recognized as one of the most prestigious at the university.

– How did the study at BHOS prepare you for education in Germany?

– The Higher School played a key role in helping me to receive high-quality education according to world standards. The experience, which I obtained during my internship and on-the-job training at transnational companies, was also conducive to my preparation for the Master studies. In addition, at BHOS I had an opportunity to develop best qualities, which every student in the 21st century must possess.