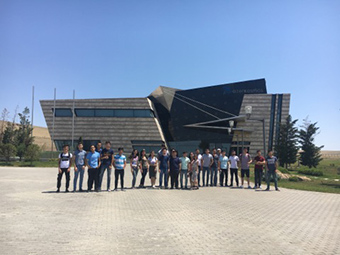 First-year students of Baku Higher Oil School (BHOS) visited Main Ground Satellite Centre of Azercosmos Open Joint Stock Company (OJSC). They received detailed information about activities carried out at the Centre including launch into the orbit and maintenance of Azerspace-1, the country’s first telecommunication satellite in space. The tour of the Centre concluded with question-and-answer session.

Azercosmos, the only satellite operator in the Caucasus, provides highly-reliable, satellite-based communication services to enterprise and government customers. The Azerspace-1, the first-ever satellite of Azerbaijan, was launched into orbit in February 2013 at orbital positions 46° east. The satellite covers Europe, significant part of Africa, Central Asia, Middle East and Caucasus. The second Azerbaijan telecommunication satellite, Azerspace-2, is scheduled to be launched by Azercosmos in 2018. It will cover Europe, Middle East, Sub-Saharan Africa, and Central and South Asia. The visits of BHOS students to the Main Ground Satellite Centre are arranged upon an agreement between the Higher School b reached by BHOS and OJSC Azercosmos to raise the students’ awareness of achievements attained by Azerbaijan in the field of information and communication technologies and help them to gain knowledge about advance fields of science and innovation technologies.