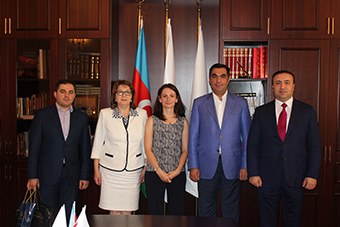 Rector of Baku Higher Oil School (BHOS) Elmar Qasimov held a meeting with Program Manager of International Science and Technology Initiatives (MISTI) in Eurasia and of Global Startup Labs of the Massachusetts Institute of Technology (MIT) Ekaterina Zabrovskaya. Director General of SOCAR-AQŞ Ramin Isayev, MIT graduate Ramil Maherramov and Dean of BHOS Lifelong Learning Department Rena Mustafayeva also attended the meeting. The purpose of Ekaterina Zabrovskaya’s visit to Azerbaijan is to explore the needs and opportunities for developing a partnership and cooperation program between the Massachusetts Institute of Technology, one of the flagship universities in the world, and Azerbaijani universities, companies and organizations.

Having welcomed the guests, BHOS Rector Elmar Gasimov informed them about history and development of the Higher School, achievements attained in a short period of time, BHOS international relations and conditions created at the Higher School’s new campus. Program Manager of MISTI in Eurasia and MIT Global Startup Labs Ekaterina Zabrovskaya provided detailed information about International Science and Technology Initiatives, MIT’s pioneering international education program. As she informed, MISTI match MIT students with tailored internship, research and teaching opportunities abroad, and also facilitates MIT faculty collaborations and develops partnerships with leading companies, research institutes and universities around the world. “MIT has similar partnership programs with 22 countries. One of our objectives is to establish MIT Global Startup Labs in Azerbaijan. It is a multidisciplinary group of MISTI, which aims to cultivate, support and empower a generation of young-tech entrepreneurs through startup labs, capacity building and competitions,” Ekaterina Zabrovskaya said.

The meeting participants also discussed other issues of mutual interest and prospects of cooperation between two higher educational institutions including student exchange programs, and joint research and scientific projects and initiatives.

Founded in 1861, the Massachusetts Institute of Technology is one of the world's most prestigious universities. The Institute is traditionally known for its research and education in the physical sciences and engineering, and more recently in biology, economics, linguistics, and management. As of 2015, 85 Nobel laureates have been affiliated with MIT. Many of MIT's alumni have had considerable success in scientific research. One of them is world-known mathematician and computer scientist of Azerbaijani origin Lotfi Aliasker Zadeh, currently professor emeritus of computer science at the University of California, Berkeley. He is best known for proposing the fuzzy mathematics consisting of the fuzzy related concepts.